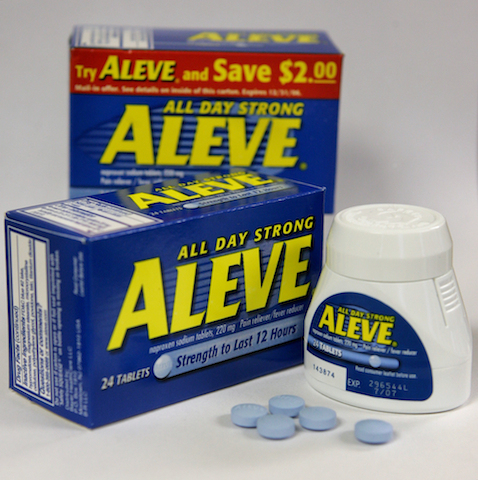 The FDA has just released a report citing clinical study evidence that the naproxen painkiller Aleve has a lower cardiac risk than ibuprofen rivals such as Motrin and Advil.

An advisory committee made up of doctors and medical experts for the government agency said it recommended a new label for pain relievers containing naproxen, stating there is now credible evidence that the drug carries a lower cardiovascular risk than other meds in that category, according to The Wall St. Journal.

The latest discovery stems from several clinical studies that the FDA has reviewed since 2005, when the heart risks of a class of leading painkillers came under public scrutiny. The class of pain relieving drugs that are being reviewed fall under the heading of NSAIDSs or nonsteroidal anti-inflammatory drugs–naproxen (Aleve), ibuprofen (Motrin, Advil) and prescription drug celecoxib (Celebrex).

What makes naproxen stand out from the other pain killing drugs? Clinicians found that naproxen does not cause cardiovascular events that cause heart attacks at over-the-counter and prescription doses. The heart risks associated with ibuprofen drugs will not be problematic, however, if a person is taking a low dose for a couple of days. The latest research on the ibuprofen findings only pertain to “chronic use and at high doses.”

Experts agree that people with existing heart problems would be well advised to consider the new findings and discuss making a switch to naproxen-containing pain medications with their physicians.

How is the FDA encouraging new treatments?

The Howard University College of Pharmacy, in collaboration with the Food and Drug Ad-ministration (FDA) and GlaxoSmithKline, announces the creation of a new fellowship centered on regulatory affairs and policy […]