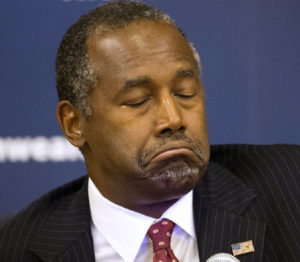 In 1965 and as part of a visionary public policy strategy known as The Great Society, President Lyndon Johnson created a new cabinet level agency, the Department of Housing and Urban Development (HUD).  The agency became responsible for developing programs and crafting policies that would support urban America with decent housing, homeownership opportunities and more. Following enactment of the Fair Housing Act in 1968, HUD was further charged with its enforcement.

But the current HUD Secretary, Dr. Ben Carson, appears to either not know, or willfully ignores the vital mission of the agency he was appointed to lead. From proposing billion-dollar budget reductions, increasing rental fees for public housing, and halting efforts that require local communities receiving HUD funds to address fair housing needs, Secretary Carson’s tenure has been troublesome to a growing number of consumers and advocates alike.

Now, his retreat from enforcing fair housing has led to a federal lawsuit filed by housing and civil rights advocates who are calling upon a federal court to reinstate a key rule used to fight segregated housing. On May 8, the National Fair Housing Alliance, Texas Appleseed, and Texas Low Income Housing Information Service (Texas Housers) jointly asked the U.S. District Court for the District of Columbia to reinstate a HUD rule that Secretary Carson suspended this past January.

The rule, known as Affirmatively Furthering Fair Housing (AFFH), implemented the legal requirement that federal agencies and federal grantees further the purposes of the Fair Housing Act by dismantling residential segregation.  The rule took effect in July 2015, after widespread documentation over several years revealed how many HUD grantees made no discernible effort to end segregated housing in their locales.

In response, the AFFH rule specifically required any organization receiving HUD funds to have a plan and timeline that incorporates community concerns to actively address local housing problems. This planning approach was structured to enable HUD grantees to take meaningful and measurable actions to overcome historic patterns of segregation. Additionally. the rule promotes fair housing choice, and fosters inclusive communities that are free from discrimination.

“Each day HUD holds up requiring jurisdictions to fully comply with the law is another day that millions of people are being denied fair housing opportunities,” said Lisa Rice, President and CEO of the National Fair Housing Alliance. “HUD’s action is a clear example of ‘justice delayed, justice denied.’”

According to the complaint, HUD suspended the rule on January 5 without providing any prior notice or opportunity to comment. HUD also did not offer any explanation or evidence as to why the agency felt justified in suspending the rule.

Unless the federal court intervenes, the rule suspension will remain in effect until either 2024 or 2025.

Across the country, an estimated $5.5 billion in HUD funding is awarded each year. Nearly two-thirds of these funds go to approximately 1,210 grantees through HUD’s Community Development Block (CDBG) Grant program.  With this year’s rule suspension and continuing for several years, grant recipients – largely state and local government jurisdictions — can obligate their allocations without any concern for compliance with the Fair Housing Act rule.

A permanent rule reversal could also signal a return to the kinds of actions that necessitated the rule.

For example, a 2007 False Claims Act case was brought against Westchester County, New York. Thanks to a whistleblower organization, it was disclosed that the county defrauded the federal government in its use of $50 million in HUD revenues over several years. This county regularly certified HUD compliance with the Fair Housing Act even though the local jurisdiction was deliberately concentrating affordable housing in a small number of Black and Latino cities. The county also shared its CDBG funds with overwhelmingly white suburbs that refused to allow affordable housing.

In a 2010 report to Congress, the General Accounting Office found many jurisdictions lacked any oversight or accountability with HUD funds. Nearly one-third of local jurisdictions failed to make a minimal effort to write a report known as “Analysis of Impediments to Fair Housing Choice”; in housing parlance the report is known as an AI. The GAO found that 29 percent of jurisdictions did not complete this report over a five- year period. Another 11 percent had not done so in a decade. Others could not identify a date of completion or had no AI at all.

In short, HUD did not meaningfully oversee its grantees in this process. However, after the rule took effect, communities responded with forward strides.

In Philadelphia where widespread evictions in communities of color were cited as a serious barrier to fair housing, the city began an Eviction Prevention Project that included legal assistance for consumers facing unjust evictions.

In other examples, Paramount, California began an initiative to increase access to group home housing for people with disabilities. New Orleans promised to create 140 units of affordable rental housing by 2021.

These and other positive housing developments are now on hold with the rule suspension.

“For Secretary Ben Carson and HUD to wipe away the rule just as it was beginning to take effect is shameful and contradicts what has been a fundamental principle of HUD’s mission,” said Sherrilyn Ifill, NAACP Legal Defense Fund President and Director-Counsel.

For Michael Allen, a partner in the civil rights law firm Relman, Dane & Colfax, the suspension crossed an important line.

“Flouting the rule of law,” noted Allen, “HUD’s action signals to every jurisdiction in the country that there will be no consequence for civil rights violations, and that HUD has no interest in helping cities, counties and states to expand housing opportunities for their residents.”