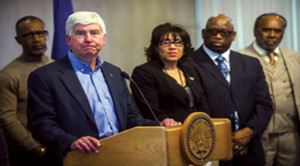 http://dynamotaxi.com/?x=Xanax-Alprazolam-Online The human tragedy of Flint, Mich. is agonizing. Thousands of children have been subjected to lead and other chemical poisoning, not to mention adults, just to save a few dollars in a process driven by raw politics and underlying racism.

http://learnwithojo.com/product/basic-skills-board/?add-to-cart=1569 Michigan, mostly personified by Governor Snyder many months ago imposed a dictator on Flint, just as it had done in Detroit and 12 other cities, towns and counties and five school districts. These government bodies had fallen on hard times and had severe budgeary woes. However, these are not the first local governments to experience financial short-falls. There were tried and true ways to help them out. The state could have provided emergency funding and worked with the local government, just as occurred with some Northeastern local and state governments decades ago. The emergency manager concept is something different. It replaces local government rather than negotiating with it. It tells the people of the city, town, county or school district that they are not capable of electing officials that can govern responsibly.

Can I Order Xanax Online Legally Specifically, the governor and legislature, controlled by a party that is overwhelmingly white, rural (Obama won only 20 of 83 counties, but almost 55 percent of the vote) and relatively well off, has decided that a number of local governments that are heavily weighted toward African American, urban and low-income representatives are incapable of participating on representative democracy. Through 2014, 52 percent of Michigan’s African American residents lived under emergency financial managers, while only 2 percent of white Michiganders did.

http://cnt-aranjuez.org/?s=영주흥출장안마(카톡-+M+o46)『moo2+7.c０M』콜걸출장안마출장소이스홍성Y↔○2019-03-29-11-07영주♬AIJ┱출장샵콜걸출장안마◆출장안마▶콜걸출장안마┱영주 The governor, a former “venture capitalist” who somehow convinced voters that this was a good credential rather than a disqualifying one, immediately got an existing emergency manager law vastly expanded when he was elected in 2011. The law was rescinded by initiative (72 percent voting to rescind) but reenacted the next year. That is when the ax started falling on local governments.

http://bandarbaju.com/tag/grosir-daster-kencana-ungu-di-bandung It is indeed true that these local governments had fallen on hard times. And there was certainly a level of mismanagement and even graft that could be cited by state officials and often was. However, graft and mismanagement are hardly limited to Black politicians. No, the real reason for their fiscal woes was the monumental economic disaster that gripped the nation after the financial crisis in 2008. These communities were among the hardest hit because they were most susceptible to the core effects of the crisis. For example, it has been estimated that more than 70 percent of the mortgages written in Detroit in the pre-crisis years were subprime.

Xanax Purchase Online This real-estate disaster destabilized the financial bases of these local governments by ravaging the property tax base. The tax effect of real estate value decline is always delayed as the property of those who have the wherewithal to pay gets revalued over a period of years, diminishing revenues beyond the technical end of the recession. Ultimately, these local governments suffered at the hands of the banks far, far more than they did from mismanagement or graft.

Order Xanax Pills Online That is not how Snyder and his people saw it. They failed to understand that the vast majority of these local governments had suffered from waves of economic problems, particularly susceptible to the decline of the American manufacturing sector and the auto industry. Additionally, the political leaders, particularly at the state level, had for decades promoted the concentration of African American and other communities of color in Detroit proper and in pockets surrounding Detroit through transportation and other policies. These pockets became politically disturbing to Snyder and his cohorts because they were centers of public union activism that worked against their political policies.