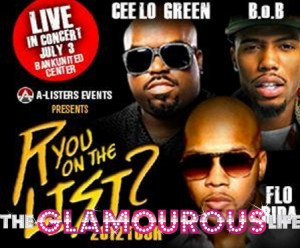 Tuesday, July 3 at Bank United Center on the U.M. Campus

MIAMI, FL – Flo Rida, Cee Lo Green, and B.O.B. have teamed up for one of summer’s hottest musical events, the “R You on the List” tour. Kicking off with the release of headliner Flo Rida’s new album, ‘Wild One’ on July 3 in his hometown of Miami, the nine-city arena tour will also feature chart-toppers Karmin and Kirko Bangz in select markets.

“R You on the List” will be the first headlining tour for three-time Grammy-nom Flo Rida, who “consistently proves his command of the rap and pop world” (Billboard). Best known for smash hits “Low” and “Right Round,” the infectious title track from his new album ‘Wild One’—a collaboration with Sia—has been blazing the top of iTunes charts since December.

“This tour is going to be off the hook,” Flo Rida said. “I’m excited to be joined by artists I respect and I can’t wait to kick it off in my hometown.”

‘R You on the List’ will be the last time fans will have a chance to see Grammy-winning The Voice star Cee Lo Green before he begins a three week residency at Planet Hollywood Resort and Casino in Las Vegas.

Since his debut single “Noth-in’ on You” (featuring Bruno Mars) reached number one on the Billboard Hot 100, B.O.B. has been featured in a national Adidas endorsement campaign and received nods from awards shows from the American Music Awards and Grammys, to the BET Awards and NAACP Image Awards.

The event will be held July 3, 2012 at 7 p.m. at the Bank United Center, 1245 Dauer Dr., Coral Gables, tickets: $99 to $129 at Ticketmaster, http://bit.ly/McWKvk
http://www.ryouonthelist.com/, https://www.facebook.com/RYouOnTheList or http://www.shorefire.com/clients/ryouonthelist/

For more information on ‘R You on the List’ please contact Andrea Bussell (abussell@shorefire.com) or Rebecca Shapiro (rshapiro@shorefire.com) at Shore Fire Media, (718) 522-7171 or Suzan McDowell (suzan@circleofonemarketing.com) at Circle of One Marketing (305) 576-3790.