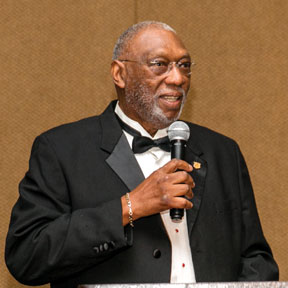 The attorneys  named the Association after T. J. Reddick, the first Black attorney to open an office and practice law in Broward County, Ruby Green, president of the TJRBA outlined some of the group’s community involvement activities.

Incoming President George Odom Jr., provided some insight on the direction he would like the organization to go under his administration.

“This administration has three primary initiatives; one is dealing with diversity on the bench. Quite frankly, we need more Black judges on the bench so that it will reflect an appropriate percentage of the population of Broward County of those who utilize the court’s services. The second is we want to bridge the gap and continue to learn about our history as well as striving forth to make new history.

“We’re going to be making sure that we break new ground with our pioneers so that we can continue to learn about the T.J. Reddick Bar Association. Thirdly will be the president’s initiative which will be one of our long term goals with the students of William Dandy Middle School who are selected to take part in our program as we try to encourage them to continue to go through the Fort Lauderdale High School Pre-Law Program. With the ultimate goal to getting them to apply for law school.”

Under the banner, “Being The Change We Seek,” the TJRBA held its 25th Annual Scholarship & Awards Gala on June 25th, at the Signature Grand Banquet Hall, in Davie, Fla.

Florida Supreme Court Chief Justice Perry delivered a sterling keynote address in which he touched upon many of his personal struggles which chronicled the systematic racism he faced to become a lawyer. Perry joined a group of Black law students who  successfully won their class action suit, filed in the state of Georgia alleging discrimination against Blacks who sat for the state bar exam.

From that point on he devoted his life to becoming a civil rights advocate in the fight for equal justice for minorities. Justice Perry 72 announced that he would be stepping down from the bench at the end of this year. Although he said that progress had been made in this country he challenged African American lawyers to continue the work that needed to be done.

“It’s important that we run for office. It’s also important that we vote. And I know that I’m preaching to the choir but you need to take this message outside of this room, because elections have consequences. Not just on the federal level but on the state level as well as the local level. It’s important that you educate yourself, that you vote, and you encourage other people to vote. Because people who don’t vote are a voiceless people and they’re taken for granted by politicians. If they tell you that they don’t believe in diversity, believe them.”

Several attendees as on queue were unanimous in agreement regarding diversity in Broward County’s judicial system.  They all acknowledged the need to increase the number of minorities, on the bench particularly among African American judicial appointments.

Eugene Pettis of Haliczer Pettis & Schwamm echoed the sentiment shared by his colleagues.

“Diversity is essential we learn so much from each other. Each of us has walked a different path in our lives. It’s very important that we bring that to the bench, so that judges in our judicial system we’ll one be reflective of our communities, so that people will have faith and trust that our system is fair to them. And secondly that we should learn from each other because we have different sensitivities given our experiences. And it’s very important that everybody in each community is represented.”

Gordon Weeks, chief assistant, Public Defender’s Office, expressed optimism but said there was still much work to be done in the area of diversity on the bench locally and statewide.

“There are some positives on the rise. We have some very strong, committed, and dedicated judges that are on the bench from the Black community. One of the obstacles that we’re facing is that we need to have more minority judges, particularly more Black judges on the bench. Diversity is a very important issue that needs to be addressed. Not only in Broward County but in the state of Florida.

“A recent report just came out last week that suggested that we are almost at the bottom when it comes to diversity in the nation. And when you don’t have a diverse bench, a bench that looks like the community, the community loses confidence in the court system.”

Judge Kenneth Gillespie, on the bench in Broward County since 2009, alluded to the special challenges he’s faced while on the bench.

“Being one of six Black judges is very difficult, particularly when we live in a county where African Americans make up around 30 percent of the population and just being one of six. If you believe in the Supreme Court mandate, that the bench should reflect the diversity of our community, then we are short about 22 more judges.”

“As a Black elected official it’s critical for me to interface with all those judges and lawyers, especially the Black ones, because there’s a huge deal of empowerment they have through the legal system. We have many judges in Broward County but only six Black ones. My goal as an elected official and leader in this community is by 2020 get to where we double that to 12 at least,” said Broward County Commissioner Dale Holness.