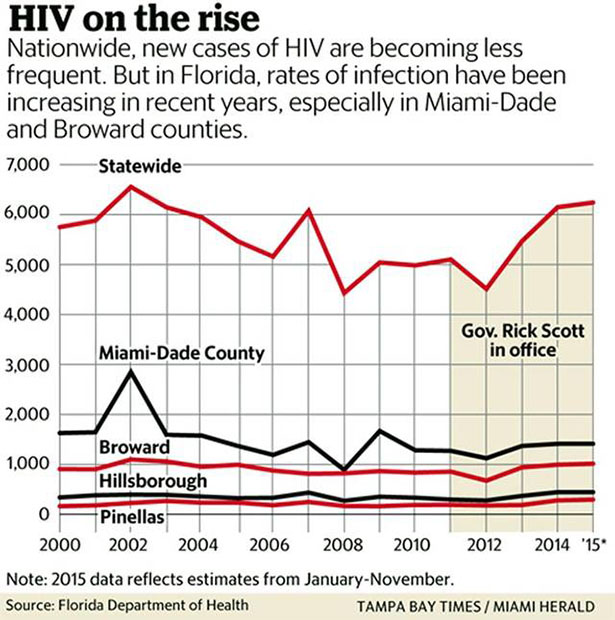 Miami-Dade is No. 1 in U.S. in new HIV infections.

Florida leads the nation in new HIV infections, but it’s not being treated as a crisis by Gov. Rick Scott or the state’s top health officer, Dr. John Armstrong.

As the disease has spread, Scott and Armstrong have imposed four years of personnel cuts in the Department of Health that have shrunk the size of county health departments.

State lawmakers are now asking whether the spending decisions have produced a sicker population in a state where HIV infections have risen each year since 2012 as they’ve declined across the country.

Armstrong said Florida is spending a record $34 million on HIV and AIDS prevention this year, thanks to a federal grant. He did not dispute the rise in infections.

“Staff reductions did not impact the surveillance, education, prevention, counseling, testing, care and treatment of HIV/AIDS patients,” he said in a statement.

But some advocates say Armstrong is part of the problem because he rarely talks about HIV or AIDS and instead places greater emphasis on fighting childhood obesity.

“Without leadership at the head of the agency speaking a-bout this, it creates a hurdle,” said David Poole, director of legislative affairs for the AIDS Health Care Foundation, which offers treatment and prevention throughout Florida.

Poole worked in the Department of Health’s HIV program for 12 years. He said staff reductions have hampered prevention, and that has led to a rise in cases.

“Silence equals death,” said Ron Ford, 53, of Clearwater, a former HIV caseworker who has the virus. “This does not have to happen. But people have to start talking about it for it not to happen.”

Armstrong is under new scrutiny about rising HIV rates and budget cuts as he faces a Senate confirmation hearing Tuesday in an effort to keep his job.

A former Army trauma surgeon, he was a top medical officer at the USF Health Center, earning $405,000 a year, when Scott appointed him surgeon general and health secretary 2012.

In his first year, the state saw 4,512 new cases of HIV infections. The number has in-creased every year since then.

New cases last year totaled 6,240, the highest since 2002. Miami-Dade and Broward together account for 38 percent of that total.

Although Florida is among the nation’s fastest-growing states, Scott has pushed every year to trim the state work force, and nearly one-quarter of those reductions have been in the Department of Health.

The 67 county health departments, largely funded by the state health agency, have declined to 10,519 positions compared to 12,759 in the year Scott took office.

“It’s indicative of the neglect of this administration across the board in social services,” said Sen. Oscar Braynon, D-Miami Gardens. “We have a rise in AIDS and we have a reduction in public health spending. We’re now cutting just to be cutting.”

Braynon is a member of the Senate Health Policy Committee that will scrutinize Armstrong’s record starting Tuesday.

Sen. Don Gaetz, R-Niceville, is troubled that under Armstrong, the agency’s mission has shifted away from direct patient care to messaging about health.

Gaetz said he respects Armstrong’s work as a doctor and veteran, but wants the agency’s mission to return to treating more people at county clinics. He said he was undecided on whether to confirm Armstrong.

If Armstrong loses Gaetz’s vote and can’t win support from all five other Republicans on the panel, he’ll be in jeopardy of losing his $141,000-a-year job.

Armstrong has clashed with senators twice in the past year. He dodged questions about whether the Senate’s failed effort to expand Medicaid would have led to better health outcomes. His agency’s changes to the Children’s Medical Services program last year ended coverage for about 9,000 children.

Sen. Denise Grimsley, R-Sebring, supports Armstrong, but said past budget cuts may have cut too deeply.

“I’m not sure that we haven’t over-reduced,” she said. “It’s time for us to go back and look at the funding we give to them, especially in rural counties.”

Others say money is not the problem.

“We have found that Tallahassee is supportive and is doing whatever they can, within their ability, to address the uptick in HIV,” said Priya Rajkumar, vice president of Metro Wellness and Community Centers in Tampa Bay.

Rajkumar said the state has launched programs to address HIV and AIDS in minority communities, including efforts to reach two separate high-risk groups: Black women, and men who have sex with men.

Dr. Claude Dharamraj, the retired Pinellas County Health Department director, said much of the state’s money for HIV comes from the federal government.

Most is for people infected by the virus or those who have AIDS.

“I think it’s because there’s more testing going on around the state,” Harper said. “We’re finding people who have been HIV positive for a while and didn’t know it.”

Armstrong declined requests to be interviewed.

The agency has a budget this year of $2.9 billion, mostly from fees and federal grants, with 14,358 budgeted positions, down from 17,367 five years ago.

Scott wants the Legislature to make more health department cuts next year. In his budget recommendations, Scott called for eliminating 718 more Department of Health jobs, of which 507 are in county health departments. Those cuts would save $13 million.

“Nearly two-thirds of the proposed staff reductions are vacant and therefore will not impact daily DOH operations of result in any interruption in services,” Scott’s office said.

State agencies often keep long-dormant “phantom jobs” on the books so that they can get credit from the Legislature when they eliminate those jobs to comply with demands to cut spending.

“Now that I see some of the consequences, I need to know what positions were cut that weren’t phantom positions,” Gaetz said.

Armstrong’s own data shows that since fiscal 2010, the year before Scott took office, the amount of state money spent on county health departments has fallen 26 percent, from $173 million that year to $128 million in the budget year that ended last June.

During the same period, Scott also has vetoed millions of dollars for local health care programs.

When Scott signed the current budget last June, he vetoed $9.5 million for the Florida Association of Free and Charitable Clinics, a network of 100 clinics that provide primary care to people lacking insurance.

Scott said liability laws blocked use of the money for salaries, and as a result the program was “not a statewide priority for improved cost, quality and access to health care.”

The clinics’ director called Scott’s statement misleading because the money could have been spent on equipment, support staff and medicines.

In the current budget, Scott also vetoed three million dollars for residency slots for rural primary care doctors, $500,000 for local health centers in the Suncoast region north of Tampa Bay and $350,000 for an HIV/AIDS outpatient program at Broward’s public hospitals.

Seasons Greetings from the staff and family of the Westside Gazette

When we take all things into consideration, we are truly blessed. With whatever portion of health, strength and mental ability, we should accept it as a gift. […]

The education of Dr. King