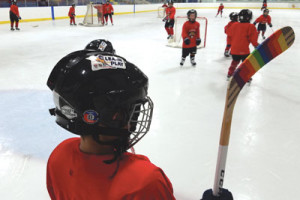 SUNRISE, FL — The Florida Panthers are proudly spreading a message of diversity and inclusion throughout the month of February as part of the NHL and NHLPA’s league-wide Hockey Is For Everyone initiative.

Hockey Is For Everyone, which was designed to promote diversity and inclusion among those of all sexual orientations, genders, ethnicities, abilities and socioeconomic statuses, was created as a way to bring people together on the ice, in the locker room and in the stands.

All 31 NHL teams are currently celebrating Hockey Is For Everyone month through their own unique programming, partnerships, ceremonies, observances and community activations. For the Panthers, the month has included a special Pride Night on Friday, Feb. 9 and has continued with a variety of special youth hockey clinics for disabled, distressed and autistic children.

On Thursday, Feb. 22, 2018 the Panthers will host Black Heritage Night.

“We’ve been proud to echo the league’s ‘Hockey is For Everyone’ message this February in a variety of ways,” said President & CEO Matthew Caldwell. “From our Owner Vincent J. Viola, on down through our organization, we’d love to invite you to our Black Heritage Night on Feb. 22 as we celebrate the contributions of Willie O’Ree and many others to the sport of hockey.”

While almost everybody knows about Jackie Robinson and the role he played integrating Major League Baseball, less is known about hockey-playing counterpart Willie O’Ree, who broke the NHL’s color barrier on Jan. 18, 1958.

At 22, O’Ree made his debut for the Boston Bruins during a 3-0 victory against the Canadiens at the Forum in Montreal. A native of Canada, O’Ree, who turned 82 in October, had four goals and 10 assists in 45 games over parts of two NHL seasons.

As we celebrate the 60th anniversary of those historic first steps onto the ice, the memories of those goals and assists is all but forgotten, but the bravery and perseverance O’Ree showed in paving the way for future NHL players of color like Peter Worrell remains.

At Black Heritage Night, local Boys & Girls Clubs members will attend a special “chalk talk” with Worrell, who gained a reputation as one of the NHL’s all-time great enforcers during his tenure with the Panthers from 1997-2003. Additionally, “Soul On Ice,” a documentary by Kwame Mason detailing the history of black hockey players, will be shown.

In addition to Worrell, other role models of color will also be in attendance to share their stories of determination, including Captain Barrington Irving, who is the youngest person to pilot a plane around the world solo, and Carlan Ivey, a scholar-athlete at West Point Cadet who won the 2016 NCAA Boxing Championship and last year’s Technical Challenge Competition for the National Society of Black Engineers.

Prior to Florida’s game against Washington, the Bro-ward Black Elected Officials will be hosting a networking event.

Panthers owner Vinnie Viola will be in attendance and give opening remarks.

Jordan, who plays the main villain Erik Killmonger that challenges T’Challa/Black Pan-ther’s ascension as Wakanda’s king, said he only truly grasped the film’s importance after see-ing it for the first time at the premiere.

“I couldn’t describe that feeling before actually sitting down and watching that film and seeing yourself on screen, not just me personally, but people that look like me in power and having those socially relevant themes but in a movie that you want to sit down and watch and enjoy,” Jordan said.

As someone from both the United States and Zimbabwe, Danai Gurira, who plays Okoye, leader of the female warriors known as the Dora Milaje who protect the king, had an even more positive response to the fictional Wakanda and its very real continent. Gurira shared that she appreciated the departure from the usual depictions of African countries as impoverished.

“You see the power and potential of where you’re from, but you see how skewed it’s viewed by the world and how misrepresented it is and how distorted it is or besieged by the world so often,” she said. “[“Black Panther” is] kind of a salve to those wounds to see this world brought to life this way and to see all the potential and power of all the different African culturalisms and aspects of our being that’s actually celebrated,” she said.

“Black Panther” is also noteworthy for its elevation of black women in the superhero genre, be they strong like Gurira’s Okoye, humanitarian like Nyong’o’s Nakia, royal like Angela Bassett’s Ramonda or STEM geniuses like Letitia Wright’s Shuri who is T’Challa/Black Panther’s sister. That elevation was also present behind the scenes through the work of production designer Hannah Beachler, Oscar-nominated costume designer Ruth E. Carter and hair department head Camille Friend.

Boseman attributes that gender balance to the vision that is Wakanda. “The idea of the next generation being smarter, being better than you, is a concept that they would have evolved to,” said Boseman. “So even though she’s reared in the same generation, she’s my younger sister, she benefits from whatever I have. So you want your sons and daughters to be better than you were. So that concept is a Wakandan concept.”

Coogler, previously known for his independent social justice film “Fruitvale Station” and the latest installment of the Rocky franchise, “Creed,” both starring Jordan, said he was cautious not to tamper too much with the “Black Panther” spirit so well established by the comic books in the script he wrote with Joe Robert Cole.

“You can go through our film and see something in there probably from every writer that has touched T’Challa’s character and the “Black Panther” comics, from Stan Lee and Jack Kirby’s initial runs to Don McGregor to Christopher Priest, Reginald Hudlin, Jonathan Hickman, and Ta-Nehisi Coates,” he said, naming most of the franchise writers. “The character has got a long history and such rich stuff to mine and each writer left their own mark.”

When the film’s radicalism was singled out, Feige reminded those in the room that “Black Panther” was born radical. “Stan Lee, and Jack Kirby, and the whole Marvel bullpen created Wakanda created T’Challa, and created Black Panther and made him a smarter; more accomplished character than any of the other white characters in the mid-1960s,” he said.

That integrity, Feige continued, guided this Marvel team. “If they had the guts to do that in the mid-1960s,” he said, “the least we [could] do is live up to that and allow this story to be told the way it needed to be told and not shy away from things that the Marvel founders didn’t shy away from in the height of the Civil Rights era.”