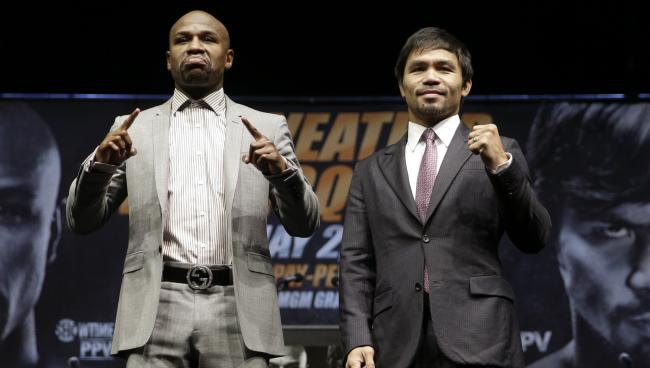 The Floyd Mayweather-Manny Pacquiao fight Saturday will be all about who can make the most punches count. But the lead-up to what’s guaranteed to be the richest fight in boxing history has been all about the mind-boggling financial math this bout will generate.

With that in mind, let’s take a look inside the numbers for Mayweather vs. Pacquiao.

5 years, 50 days: When they finally meet, that’s the amount of time that will have passed since March 13, 2010, the day of the originally scheduled Pacquiao-Mayweather fight before negotiations broke down over drug-testing issues.

$10: Price of tickets to see the Friday weigh-in, which is unprecedented. Nevada law dictates weigh-ins are always a free event, but officials made an exception this time to avoid chaos as thousands of fans clamor to get in. Proceeds will go to charity.

$99: The price for watching the fight on pay-per-view in high definition, which is a record. And the $89 price for standard definition is also a record. Previous highs were $74.95 and $64.95. Those were for Mayweather vs. Canelo Alvarez in 2013, according to The Wall Street Journal (via For the Win).

500: The number of tickets that were made available to the public at the 16,800-seat MGM Grand in Las Vegas.

60: About how many seconds it took for all of those seats to sell.

Mayweather-Pacquiao is the fight boxing has been waiting for. But will it be worth it?

$1.46 million: What Mayweather earned per minute in the ring (72 total minutes) in 2014 while bringing in $105 million and ranking asForbes‘ highest-paid athlete of 2014.

$5 million: What Mayweather will earn per minute against Pacquiao if the fight goes 12 rounds, if the latest estimates of his earning $180 million for the fight are correct. The purse will be split 60-40, with Mayweather getting the bigger chunk. But that still means $120 million for Pacquiao.

$13.5 million: The approximate cumulative amount that sponsors are paying to be part of the fight, another record. The previous high is in the $3.5-$4 million range for some other Mayweather fights, according to ESPN.com‘s Dan Rafael. The biggest sponsor for this brawl is Tecate, which is paying $5.6 million to be the official beer.

9: Number of fights Pacquiao has had since the last time he stopped an opponent. (With a TKO of Miguel Cotto in 2009.)

5: Number of fights Mayweather has had since the last time he stopped an opponent. (That was with a KO of Victor Ortiz in 2011, but it came when Ortiz had mistakenly dropped his guard after a head-butt. Mayweather’s last “pure” KO was eight fights ago against Ricky Hatton in 2007.)

$72 million: What Pacquiao promoter Bob Arum says the live gate will be for the fight. That obliterates the previous record of about $20 million, which was for Mayweather-Alvarez in 2013. 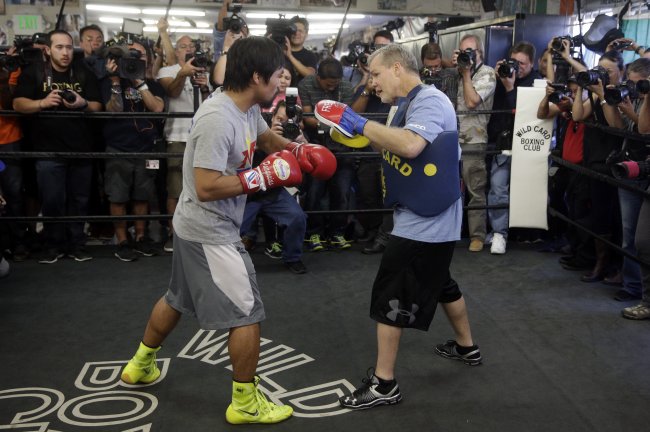 Pacquiao has been the better knockout fighter, but Mayweather has the undefeated record.

47-0: The undefeated record Mayweather is putting on the line against Pacquiao, who’s 57-5-2.

13-0: Mayweather’s record at the MGM Grand. This will be his 11th consecutive fight there, dating back to his split decision over Oscar De La Hoya in 2007. His first fight there was a unanimous decision over Gregorio Vargas in 2007.

Minus-225: How Odds Shark currently has the odds listed if you want to bet on Mayweather. Pacquiao is plus-175. Betting the fight to go the distance is minus-300, and it’s plus-230 that it doesn’t last all 12 rounds.

Top 3: In an HBO documentary (via Fox Sports), it’s where George Foreman says the Pacquiao-Mayweather fight will rank all time along with the first Muhammad Ali-Joe Frazier fight and the Joe Louis-Max Schmeling rematch of 1938. (Foreman picked Pacquiao to win by decision in a conference call, per Fox Sports’ Andre Vergara.)

3-4 million: The range of educated guesstimates on the number ofpay-per-view buys. The record is 2.4 million for Mayweather vs. De La Hoya in 2007.

5.8 million: Number of followers Mayweather has on Twitter. Pacquiao checks in with 1.8 million.

109-102: Score of the Milwaukee Bucks’ win over the Heat at Miami on Jan. 27, the game where Pacquiao and Mayweather were both sitting courtside and sparked fight negotiations by talking at halftime. Thank goodness for that, right? Otherwise it might have taken an additional five years to make this fight happen.