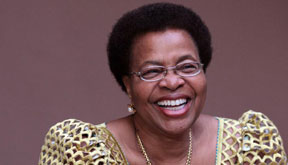 Graça Machel said that the primary mission of WIMN is to amplify the voices of women’s movements, influence governance and promote women’s leadership and contributions in the economic, social, and political development of Africa. (Graça Michel)

In an effort to transform the narrative and negative perceptions of African women and children, Graça Machel, the former first lady of two African nations, recently established a first of its kind Pan African Women in Media Network (WIMN).

http://cnt-aranjuez.org/search/문경오피걸(카톡- Po 34){Po o34.c０M}출장마사지출장여대생Y▬⇣2019-04-14-21-15문경╠ AIJ◑출장안마모텔출장출장샵추천▤출장최고시☏출장만남♀ 문경/feed/rss2/ The network of women journalists will work in conjunction with the Graça Machel Trust.

“The Graça Machel Trust’s women’s rights program is based on our aim to multiply the faces and amplify the voices of women, especially in areas where they are underrepresented,” said Machel, who is also the founder of the Foundation for Community Development in Mozambique. “Through our women’s networks in agribusiness, finance and ‘Women Creating Wealth,’ we foster links and build a critical mass of highly-qualified and active women across sectors and professions who can work collectively to influence, shape and drive the socio-economic policies to ensure that they achieve economic prosperity and social change.”

The Graça Machel Trust works across the African continent to amplify women’s movements, influence governance, and advocate for the protection of children’s rights and dignity.

http://naturesown.co.za/wp-cron.php?doing_wp_cron=1580912016.3423039913177490234375 The Trust consolidates the work of Machel and seeks to build on her legacy by inspiring the younger generation to take up new challenges and create societies that value and care about social justice.

Machel noted that the primary mission is to amplify the voices of women’s movements, influence governance and promote women’s leadership and contributions in the economic, social, and political development of Africa.

Can You Buy Xanax From Canada The Trust also advocates for the protection of children’s rights and dignity.

Recognizing the crucial role that media plays in shaping societal attitudes, Machel said it’s important that women are at the center of transformation within the media landscape.

http://naturesown.co.za/product/allergix-90-capsules/?add-to-cart=24308 The new network has also gained the support of the National Newspaper Publishers Association (NNPA), the Black Press that’s comprised of approximately 208 African-American owned newspapers across the United States.

Xanax 1Mg Online “The National Newspaper Publishers Association supports and salutes the Graça Machel Trust that effectively empowers African women. When African women are empowered, it results in advancing all African people throughout the world,” said Dr. Benjamin Chavis, the president and CEO of the NNPA.

Ordering Xanax Bars Online “The Diamond Empowerment Fund, co-founded by Russell Simmons, me and others also recognizes the extraordinary global leadership of Graca Machel and the Graca Machel Trust. I vividly remember meeting Graça Machel at her home in Maputo, Mozambique along with her husband South Africa President Nelson Mandela and my colleague Russell Simmons in 2006.”

7b9e9d52476b4d0d9ca188bd69a675a7 Chavis continued: “We discussed the ongoing struggle and movement to transform Africa for progress and the liberation of all who stand for freedom and equality.”

Prior to her marriage to Mandela, Machel was the wife of Mozambique President Samora Machel. She also served for more than a decade as that country’s minister of education and culture.

http://tamaralounge.com/wp-content/vuln.php Machel said that WIMN will drive coordinated messaging and build awareness on issues related to health, education, and women’s economic empowerment, which will have a positive effect on women and children.

http://dynamotaxi.com/wp-cron.php?doing_wp_cron=1581104260.8846919536590576171875 “Given the influential role that media plays in shaping societal attitudes, the network seeks to change the present narrative of women that presents them as powerless victims and ignores the many positive stories and successes,” Machel added. “When economically empowered, women take control of their lives, set their own agendas, provide solutions to their problems and challenges, and develop self-reliance.”

Buying Xanax Online 2015 Machal added: “To build a strong and equitable future for all Africans, we acknowledge the fundamental contribution of women and ensure that we create a supportive and enabling environment where they are able to fully participate and benefit.”

The network will also create an inter-generational platform to allow young talented female journalists to participate and work alongside the continent’s more seasoned veterans. WIMN will comprise an initial group of about 30 to 40 women journalists, bloggers and influencers, officials said in a statement.

http://grosirrumahan.com/kulakan-piyama-cewe-anak-cewe-murah-surabaya-29ribu.html “Women’s and children’s issues have tended to make headlines more as victims that are helpless, abused and exploited, yet women and children have, over time, been capable of so much more, having overcome many obstacles and excelled in many sectors of the economy and society,” said WIMN board co-chair Susan Makore. “The amazing stories need to find more expression in our media. Therefore, I hope to do my part in ensuring that key stories that highlight and celebrate the various facets of children’s and women’s activities across all sectors are given prominence in the media by working with my colleagues that run media houses, especially in Zimbabwe where I hail from.”

Bronwyn Nielsen, the co-chair of the WIMN advisory board, said that Africa’s youth and female dividends are at the core of the continent’s future.

http://boldmarketing.com/listing/4124-19th-ave-s-minneapolis-mn “It is a fact that women and children can positively impact the future from an economic growth and development perspective,” said Nielsen. “I look forward to working with my fellow board members and all the members of this privileged network to jointly leverage our circles of influence under the esteemed guidance of Mrs. Machel to drive this agenda deep across the continent with both speed and passion.”

http://cnt-aranjuez.org/?s=대구출장가격《카톡:+P+o+34》{Po+o34.c０M}출장샵콜걸출장업계위Y☂✌2019-02-20-07-36대구┌AIJ╌출장샵예약포항출장안마야한곳출장가격┎출장최강미녀╍출장샵안내◐대구 Nielsen continued: “Together we can create a new narrative when it comes to Africa’s women and children.”

Time for young people to stop the violence

Xanax Purchase Online      Energy jobs are growing faster than the national average and energy-related sectors are less diverse than the national workforce, according to the 2018 U.S. Energy and Employment Report (USEER). […]