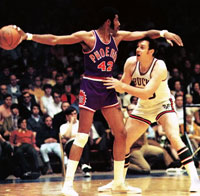 Hall of famer and former Suns power forward Connie Hawkins died Friday at the age of 75, according to family reported on KPNX by Bruce Cooper.

Hawkins grew up perfecting his craft on the streets of Brooklyn before playing at the Boys High School of Brooklyn.

Hawkins played his college ball at the University of Iowa until getting expelled for a academics scandal involving point-shaving despite never admitting to it or being charged by the University or law officials.

Also playing for the Los Angeles Lakers and Atlanta Hawks, Hawkins was inducted into the Hall of Fame in the 1992 class.

Today, the world lost not only and NBA icon, but a better man. Thank you, Connie Hawkins, for providing a foundation for the NBA and making it what it is today.