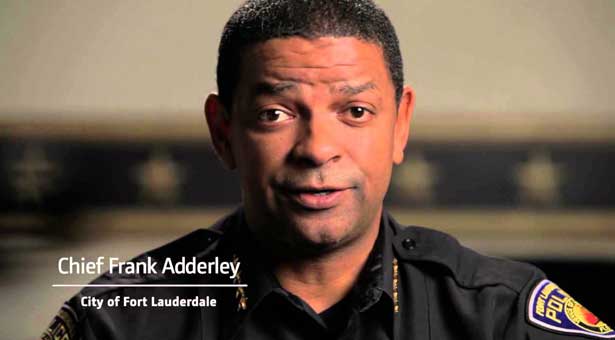 City of Fort Lauderdale Police Chief Franklin C. Adderley grew up in the city’s predominantly Black neighborhood located in the Northwest section, not far from the Sistrunk corridor. Chief Adderley is the youngest son of Bahamian immigrants, the late George and Frankielee Adderley. He attended school in the Broward County Public School District and graduated from Stranahan High School in 1979. Chief Adderley received his Bachelor’s Degree in Criminology from Florida Gulf Coast University.

For over 30 years Chief Adderley has served as a role model not only for fellow police officers but to the African American community at large. He has diligently fulfilled his duties to protect and serve all the citizens of Fort Lauderdale and received national recognition from several law enforcement organizations.

Recently, Chief Adderley made history once again. In November of 2013 he ran for president unopposed, to lead the County’s police chiefs organization. He was sworn in as the first African American elected as President of the Broward County Chiefs of Po-lice Association. Adderley joined the organization five years ago and served on its Executive Board for the past three years.

The swearing in ceremony took place on Jan. 9, at the Fort Lauderdale Woman’s Club in downtown Fort Lauderdale. The organization was founded on Dec. 7, 1956. Ironically during that time Blacks were not al-lowed to serve on any law enforcement agencies in Broward County do to racial discrimination, and before Adderley had even been born.

Chief Adderley said that under his tenure as police chief the Juvenile Justice System had posed the greatest challenge under his administration.

“I’ve served on a countywide executive board and we believe as a group that something needs to be done to prevent juveniles from the repeat cycle. That’s why we support the Juvenile Citation Program.”

The Juvenile Justice Pro-gram has been adopted county-wide by law enforcement officials and prevents students who are charged with non-violent misdemeanor crimes with serving jail time and having a criminal record. Heretofore many students were winding up in the juvenile justice system with criminal records which were having really adverse effects on their lives well into adult-hood. Studies also revealed that African American male students were more likely to receive harsher punishment when engaged in so-called criminal activity while in school than their white male counterparts.

“I believe that we need to create a structure so that first time offenders can be successful and not become repeat offenders,” added Chief Adderley.

Adderley went on to say he felt that lowering crime rates and continually being successful in meeting the public safety issues of the community as his crowning achievement thus far as the city’s police chief.

He also pointed out that his department had formed great relationships with civic organizations in Broward County such as the NAACP, religious leaders from the faith based community, and other groups to enhance those relationships.

Chief Adderley has been a 33 year veteran in law enforcement working in the community where he grew up in. He took great pride in where he came from and considered it a privilege to serve people that he had known throughout his life.

“Obviously, I’m a product of Northwest Fort Lauderdale. And I’ve spent most of my career working in the place where I grew up. The pride for me comes from doing my job to protect victims and offenders who I knew personally growing up as a youth in the city. So, I like to reach out to people, speak to them because I have already established relationships with them.”

In 1985, Chief Adderley became a Major Narcotics Detective where he worked on the United States Drug Enforce-ment Administration’s (DEA) Task Force. During this time, he authored 31 court authorized state and federal wiretaps. He was recognized as an expert in the distribution of crack cocaine in federal court, and was named Officer of the Month in February 1986.

On June 1, 2008, he was appointed as the first African-American Chief of Police in the history of Fort Lauderdale, Fla. Chief Adderley oversees a department which includes an annual budget of $100 million, 511 sworn police officers and 190 civilian employees.