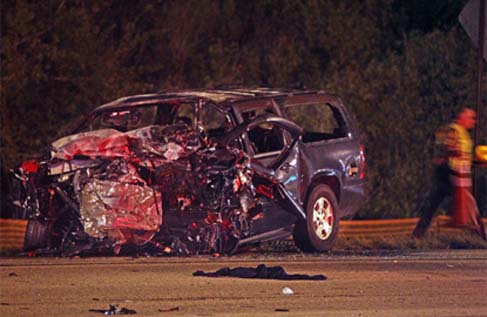 We assumed there were four people killed, but we just don’t know how many people were in the van,” said Joe Sanchez, spokesperson for the Florida Highway Patrol, referring to a terrifying accident that has rocked the region this morning. “It was that bad of an accident.”

Sanchez didn’t know exactly how fast the vehicles were moving when a minivan and a Chevrolet Suburban hit each other head-on at 1 a.m. “But speed definitely played a factor. Just look at the pictures,” he said. “You can just tell how fast these cars were going.”

“I’ve been on the Florida Highway Patrol for awhile, and I can just tell you, this was a really bad accident.”

None of the identities of those involved in the crash have been released, Sanchez said. Most of that information, he said, will be in a press statement released later today.

Charges of vehicular homicide are pending against the driver who struck the minivan, Sanchez said.

Original Post: Four people were killed in a horrific accident at 1 o’clock this morning after a driver, fleeing police, went north on I-95 south and crashed head-on into a minivan carrying four people near Hallandale Beach Boulevard, the Broward County Sheriff’s Department told New Times.

Opa-locka police were pursuing the driver of a Chevrolet Surburban, who had gotten on I-95 at Ives Dairy Road going the wrong way. Police didn’t follow the driver onto the highway, said David Chiverton, at the scene last night.

The crash, which occurred in south Broward County two miles north of Ives Dairy, was “very severe,” Joe Sanchez of the Florida Highway Patrol told the Palm Beach Post. So severe, in fact, that he wasn’t positive there weren’t more passengers inside the minivan — and that they may be dead too.

The man fleeing police, who may be charged with homicide, is in critical condition at the hospital — but is stable, Sanchez said. He has two broken legs.

As of 6:30 this morning, authorities still saturated the scene, and all southbound lanes had been closed near the exit at Hallandale Beach Boulevard, the Palm Beach Post reported.

New Times has placed calls to the relevant agencies and will update the story throughout the day.