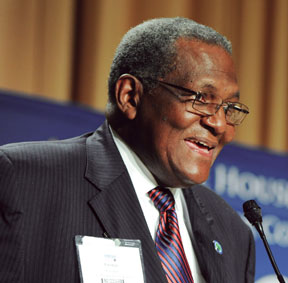 WASHINGTON (NNPA) – Funeral services for George Cooper, the 10th president of South Carolina State University in Orangeburg and executive director of the White House Initiative on Historically Black Colleges and Universities, were held Monday, July 27 at The Peoples Community Baptist Church in Silver Springs, Md. He died on Sunday, July 19.

In a statement on the death of Cooper, U.S. Secretary of Education Arne Duncan said that Cooper made tremendous contributions that benefited countless students in a full and extraordinary career.

“Throughout his life, Dr. Cooper was committed to promoting excellence, innovation and sustainability across our nation’s HBCUs,” said Duncan. “Dr. Cooper provided the wisdom and direction needed to form important partnerships between HBCUs and the federal government.”

Duncan continued: “This Administration has truly benefited from Dr. Cooper’s leadership and will continue our service and advocacy for HBCUs in a manner that follows his passion, persistence and humility. Although he will be sorely missed, his legacy will live beyond him.”

Congressional Black Caucus Chairman G. K. Butterfield called Cooper “a lifelong supporter of higher education” and HBCUs, in a statement from the group.

“As a former president of South Carolina State University and the Executive Director of the White House Initiative on Historically Black Colleges and Universities, George Cooper understood well the role that HBCUs continue to play in providing access to higher education for many African American and minority students,” said Butterfield.

In a separate statement, President Barack Obama said that Cooper spent the majority of his life ensuring that students at HBCU’s were receiving a quality education and had what they needed to succeed and improve their communities and the nation.

President Obama continued: “George’s passing is a great loss for my Administration, the HBCU and higher education communities and for everyone that knew him.”

Cooper’s tenure at South Carolina State University, that lasted less than four years, was buoyed by success and controversy. State lawmakers had already decided to slash funding to the school when Cooper took the reins of the embattled HBCU in July 2008. Enrollment declined sharply and Cooper narrowly survived a trustee vote for his termination in 2010.

In the midst of an investigation into allegations of criminal misconduct, Cooper fired eight high-ranking school officials in February 2012, The Times and Democrat reported, even though those an official connected to the investigation said that those “who were fired weren’t necessarily linked to anything criminal.”

By the time Cooper stepped down in March 2012, he was credited with making progress on a number of new construction projects at the school, according to the local media reports, including the first building in the Clyburn Transportation Center Leroy Davis Sr. Research and Science Complex and the 86,500-square-foot state-of-the art engineering and computer science complex.

Cooper served nearly 20 years with the National Institute of Food and Agriculture at the U.S. Department of Agriculture. Before taking over at South Carolina State University, Cooper also served stints as the vice president of Academic Affairs and Professor of Animal Science at Alabama A&M University in Huntsville, Ala., and as the dean of the School of Applied Sciences and the School of Agriculture and Home Economics at Tuskegee University.

According to a press release on his inauguration as president on South Carolina State University’s website, the Tallahassee, Fla., native earned a bachelor’s degree in animal husbandry from Florida A&M University, a Master’s of Science in Animal Science from Tuskegee University, and a Doctor of Philosophy in Animal Nutrition from the University of Illinois at Urbana.

The NNPA News Wire reported that shortly after he was named the executive director of the White House Initiative on HBCUs, Cooper urged officials at Black colleges to work closely with the Obama administration to improve conditions for their students.

“We can’t change history,” Cooper said. “What we have to do is move forward.”

Cooper is survived by his wife, Diane and two daughters, Nikki and Carey.

Just because you don’t have to, doesn’t mean you shouldn’t

Just because you don’t have to, doesn’t mean you shouldn’t