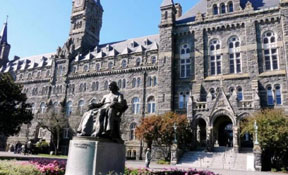 Georgetown is trying to make good on their slave owning past, but is what they are offering good enough?

http://boldmarketing.com/payment_calculator.asp       Georgetown, much like Yale and Brown and many other IVY League Universities had slave labor and now Georgetown much like Brown who back in 2003 launched a three-year study of its relationship to the trans-Atlantic slave trade and eventually created an on-campus Slavery Memorial is also trying to make good on their slave owning past.

Not sure of the total amount of slaves Georgetown actually owned in its entirety, but they are offering the descendants of nearly 300 slaves preferential treatment in its admissions process. Meaning they will give them an extra look, if they apply to the school like they give members of the Georgetown community’s kids and grandkids.

Buying Xanax In Thailand In 1838, the school sold 272 slaves who were working on plantations in southern Maryland to pay down its debts.

The President of George-town, John DeGioia officially recognized the school’s past Thursday afternoon in a press conference. “We must acknowledge that Georgetown participated in the institution of slavery. There were slaves here on the hilltop until emancipation in 1862.”

Steroids Xanax Buy Georgetown, not stopping at the preferential treatment, will also have a Mass of Reconciliation where it will apologize for its history. “We cannot do our best work if we refuse to take ownership of such a critical part of our history,” DeGioia said at the press conference.

http://audiodescription.co.uk/directory/describers/filter/certificate-in-audio-description-skills-stage/live-events Since last September, DeGioia has had a 16-member Working Group of Slavery, Memory, and Reconciliation consisting of students, staff and alumni to make recommendations on how the school can a-mend its historical ties to slavery. To help find and connect with the descendants, the group created The Georgetown Slavery Archive, which provides genealogical information and other materials about slavery at the university to help find and connect with the descandants. The documents also show the names, ages and relationships of the 272 slaves sold in 1838.

Buying Xanax Online In Australia Some descendants rightfully so, want to be more involved in what Georgetown is doing and how the school can rectify their past, and have reached out to the school and provided additional information, according to Adam Rothman, a history professor at Georgetown who is also a member of the working group.

http://cnt-aranjuez.org/?s=〖온라인카지노〗⇥-더킹카지노-♨라스베가스 카지노 슬롯 머신☎［］┵【gmvcs.com】┓[]2019-03-03-00-22[][]▶╦[][]↘[][]┊pl파라다이스 워커힐 카지노apN DeGioia has visited with descendants in recent months, and said that the school will support reconnecting the descendants of the slaves who were split up when they were sold.

Cheapest Xanax Online “We have very good records in our archives, more than 100 boxes,” he said.

http://tamaralounge.com/?y=Cheap-Xanax-Online-Australia&6bb=84 One of the slave descendants- Maxine Crump, whose great, great grandfather was among those sold in 1838, told CNN’s Brooke Baldwin:

“I was driving at the time, and I felt like my car was going but I had stopped. It just took over my whole being. It was a door that opened that I never expected would have opened in my life.

The school also plans on creating a memorial to honor the 272 enslaved men, women and children, create the Institute of Slavery and its Legacy, and also rename two buildings that had been named after the presidents who facilitated the 1838 sale.

“It’s a diverse community, there are a lot of African American students, staff and faculty, and to have African Americans contributions to the history of the university recognized … it’s really important for bringing the whole university together.” said Rothman.

Xanax Canada Buy My Thoughts On This:

Xanax Uk Online Why not let the descendants of the slaves who worked for Georgetown, attend Georgetown for free? Their former slave ancestors worked for FREE, so why should they have to pay to go to there?

http://audiodescription.co.uk/directory/describers/certificate-in-audio-description-skills-screen/east-anglia/east-anglia/northern-ireland/international-freelance-audio-describers/theatre Now I do want to commend Georgetown for even opening up about their slave past, apologizing for it, having a Slave Archive and publicly acknowledging their wrongdoing and the history of the school regarding slavery, and even reaching out to their descdancts and attempting to do anything at all for them BUT I’m sorry Georgetown, that’s simply not enough for people who were denied of accumulating generational wealth because they were enslaved by YOUR school.

Buy Xanax Uk Forum The Germans paid Holocaust survivors and their families over $90 billion dollars in reparations and last year in 2015 our President, Barack Obama and his administration approved $12 million dollars in aid over the next five years to assist with Holocaust survivors living in America, who apparently make up about 150,000 Jewish American, age 65 and up living below the poverty line. In 1988, President Reagan signed the Civil Liberties Act to compensate more than 100,000 people of Japanese descent who were incarcerated in internment camps during World War II. And we can never forget about the Native Americans who were slaughtered right here in America, who not only get free education at public universities but some tribes get reparations from the government about $40,000 every 5 years to be exact.

Generic Alprazolam Online So what do all these former oppressed people have in common, they were all paid reparations. The were paid the money they could not make for their current family and future generations because the were being enslaved, tortued or murdered, or all three.

Georgetown could surely fit the bill for anyone of the descendants of slaves that meet the criteria to get into their school, I am sure of it as they are Ivy League.

Where To Order Xanax Online Forum If I were a descendant of a slave owned by Georgetown University and they told me their would look at my application more closely, I would be like: Wait, so your saying you want me to be indebted on behalf of this school after you already accumulated money from the free slave labor of my ancestors? What part of the game is that? That doesn’t even sound like you are really trying to make amends.

Can I Buy Xanax In Mexico Georgetown can do better and needs to do better.

http://naturesown.co.za/product/tonify-chi-60-capsules/?add-to-cart=24223 If they are really trying to make a difference and make good on their slave owning past, then they need to offer free education to the descendants of all of the slaves their school owned, who of course fit the criteria to be accepted into the university.

NOW THAT would be setting the standard for how all of these institutions and corporations who owned slaves should approach the idea of making amends with the descendants of the slaves they owned.

Buy Xanax 2Mg Cheap Another thing, I am not sure why the Presidents who facilitated the sale of the 272 slaves in 1838 deserve their name on two buildings at the school? I mean if they sold the slaves because they felt like it was wrong, that is one thing but they sold them to pay off the schools debts. How does that make them deserving of buildings with their names on them?