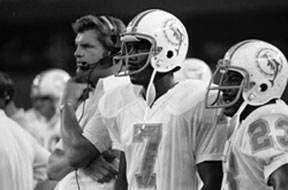 http://grosirrumahan.com/tag/grosir-baju-korea http://grosirrumahan.com/tag/grosir-baju-korea        Miami Dolphins rookie quarterback Craig Curry is pictured standing on the sidelines next to offensive line coach Monte Clark in 1972. An 8th round draft choice out of the University of Minnesota, Curry was attempting to become the first African American quarterback in team history. He would have to fight some very tough odds.

Curry was no stranger to being a pioneer. He grew up in Miami’s Coconut Grove and was one of the first Black students and football players to attend predominantly white Coral Gables High School. During his junior year in 1966, he made history when legendary Gables head coach Nick Kotys named him the team’s starting quarterback. Black quarterbacks were almost unheard of in the 1960s—especially at mostly white schools. But Curry was no ordinary football player. During his senior year in 1967, he led the Coral Gables Cavaliers to a 13-0 record and the state championship. The team was also named mythical national champions by the Minneapolis-based National Sports News Service. Kotys would later call the 1967 Cavaliers the best team he ever coached. In 2007, the FHSAA named the 1967 Cavaliers the best team in Florida high school football history. Curry played many of his biggest games at the Orange Bowl, including back-to-back victories over rival Miami High in in 1966 and 1967 in front of crowds of more than 30,000 at the Orange Bowl.

“I was not the first Black quarterback to start at the University of Minnesota. That was Sandy Stephens who started in the Rose Bowl in 1960 and 61 and won a National championship. Minnesota had a history of Black quarterbacks which is why I chose to attend.”

Xanax Pills For Sale Online Xanax Pills For Sale Online Curry’s success continued in college. He twice led the Big Ten Conference in total offense. But Curry’s pursuit of NFL success came to an end when he was cut by the Dolphins at the end of the 1972 preseason. Don Shula chose to keep Jim Del Gaizo as the team’s third quarterback, behind Bob Griese and Earl Morrall. At the time, there were no black starting quarterbacks in the NFL. The following year, James Harris of the Rams and Joe Gilliam of the Steelers became the first. The Dolphins asked Curry to switch to receiver, a move many African American quarterbacks were forced to make.

Since his football career, he has gone on to a long career as an athletic administrator. He served as athletic director at the University of Arkansas-Pine Bluff and is currently a public speaker. For more on Craig Curry, here’s a website with additional information: https:/craigcurryconsulting.wordpress.com/…/1-natl-footba…/