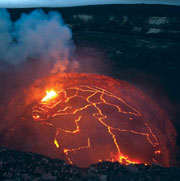 Besides being the source of transcendent physical and mental respite and inspiration, our national parks provide me with physical images that anchor my spiritual growth.

For example, in meditation this weekend I had the profound experience of seeing myself  ‘break open’ to reveal an inner core, infinitely connected with Earth’s fiery origins. Immediately my thought went to Hawaii Volcanoes National Park for an image that would help cement that vision, and I was rewarded with the beauty above.

I haven’t had the luxury of visiting Hawaii yet and I am inviting my Hawaiian friends or anyone who’s visited this park to lead us on a tour there. But the theme of a fiery explosion was in the ether this weekend, as I received a note from my friend Teresa Baker (founder of the African American National Parks event June 22 & 23, 2013) telling me about her experience Saturday at the 69th Annual Commemoration at Port Chicago Naval Magazine National Memorial in Concord, Calif.

The site is on a working military base and preserves the spot where a massive cache of munitions being loaded by African Americans and other sailors exploded on the night of July 17, 1944. It caused the immolation of 320 men and the subsequent court martial of 50 Black sailors who refused to go back to work in the patently unsafe conditions. It was the worst home front disaster in WWII.

According to the National Park Service the Memorial “is not only a tribute to the 320 men who died in the WWII explosion, but it became the touchstone for desegregation in the military.” This underscores the value of our National Park System in protecting pivotal places in our history. The parks’ very existence depends upon the extent to which Congress supports them, and today I am pleased to share NPCA’s list of “157 representatives in the current Congress for their voting record in the last Congress (112th) who are being honored with a Friend of the National Parks Award. The award was established in 1999 to track and publicize congressional members’ votes on significant national park issues.

“The purpose of the Friend of the National Parks Award is to recognize those members who actively work to preserve and protect the integrity of our National Park System by casting pro-park votes, and to cultivate park champions – members who will sponsor or co-sponsor park legislation, or who will voice their concerns during contentious legislative and administrative fights.”

“Have you heard of Port Chicago? Not many have. Having heard bits and pieces of the story over the years, I never thought much of it. But after reading Robert Allen’s book, ‘The Port Chicago Mutiny,’ visiting the site and listening to the stories told by descendants of the soldiers and military personnel who were enlisted in the military at the time, I now know that we all owe it to those who lost their lives, to not only read about it, but to care about it.

“I’ve heard that the history of Port Chicago could well have been the beginning of the civil rights movement, yet it is not mentioned in most history books. It’s a story that has been under wraps for 69 years. A history that began December 8, 1942 when the very first Navy ships were loaded with munitions, in a city that no longer exists, Port Chicago.

“Port Chicago was home base for thousands of African American sailors who, unlike their white enlisted counterparts, had absolutely no say in their marching orders. Their job was to load munitions onto ships. There was absolutely no training for this very tedious and dangerous work. Most of the time these untrained African American sailors, were encouraged to load these ships in a speed contest and get it done in the shortest time possible.

“After the explosion, sailors were sent to Mare Island while the Port Chicago site was cleared of the devastating explosion.

“On August 9 the African American soldiers were ordered back to work, back to the same conditions that were in place at the time of the explosion. Without any idea as to how the explosion happened and no explanation forth coming, the sailors were hesitant in loading ammunition at Mare Island. 258 soldiers refused their orders. On August 12, 50 African American Soldiers (Port Chicago 50) were still refusing their orders to return to work and were formally charged with mutiny.

“On September 14, 1944, their trial began. In October that year, the honorable Thurgood Marshall requested a formal government investigation. October 24, 1944, all 50 men were found guilty of mutiny and sentenced to 15 years in prison.

“Despite several attempts to have their sentences overturned, as late as 1994 the Navy rejected a request to over-turn the court martial decision.

“The Port Chicago story is one that is still being written, as the possibility for a reversal in the court decision is still being pursued remains. We owe a great deal to those soldiers that were killed and imprisoned. Their work would have gone unnoticed, if not for the explosion.

“I encourage you all to visit the memorial site. It is flanked on the very grounds where the explosion took place. There you can read all the names of soldiers who were lost during the explosion. You can gaze out at the same water that the ships sailed. You can stand next to the pillars that rise out of the waters, as a memorial in and of themselves. It is a very serene and somewhat spiritual place.

“It is up to each and every one of us, to not allow this history to continue in obscurity. As a country we have an obligation to tell this story. As Americans we live in debt to the work they did in a segregated military that to this day, refuses to overturn a ruling that was unjust in principle. We must lend ourselves, our voices and our obligatory duty, to righting this wrong.”

Thank you for educating us about this park and this seminal event, Teresa!

Amazingly, the Park Service reports that after the explosion which completely destroyed the deep water harbor and piers, they were back up and running in a month.

If you can afford it and you haven’t bought a copy of Our True Nature yet, or even if you had already have one,  I encourage you to visit my website www.legacyontheland.com and today and get a copy or copies to support my work on behalf of our national parks.

Publication of “Our True Nature: Finding A Zest for Life in the National Park System” is supported by Delaware North Companies, Inc., Forever Resorts and Guest Service.