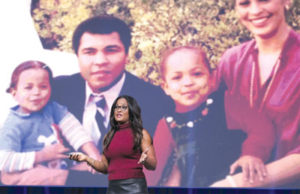 Going after what you want in life with Laila Ali

Ali’s speaking engagement was on March 27th at the Broward Center of Performing Arts in Fort Lauderdale. Each year, Broward College gathered about four individuals with different ideas and opinions to share with the community, “We wanted to bring the community together to hear different ideas that may challenge us and stimulate new ideas. We try to bring in people who may be on the other side of the political spectrum to make us think of other sides of issues,” said David Armstrong, President of Broward College.

According to Armstrong, Ali was able to share a story that people can relate to which is what Armstrong and the college look for with the speaker series. “She was inspirational to all the young people tonight. Hearing her story in an authentic way was relatable to the students and parents that heard it,” said Armstrong.

Earlier that day, Ali participated in a fireside chat at the Broward College South Campus in Pembroke Pines. The conversation started with what got her into boxing. Ali explained that her inspiration to box came from women’s boxing on television, “The moment I thought about boxing is when I saw women boxing on television for the first time. Something in me was sparked. A lot of people assume that my dad is Muhammad Ali and I wanted to be like my dad,” said Ali.

The conversation then switched to how was it to be a female athlete in a male dominated sport. “I had extra challenges especially being Muhammad Ali’s daughter. Training hard, taking the beatings, and not being respected for my work because I am a woman was what I dealt with,” said Ali. According to Ali, she had to block out a lot of negativity during her career. She had to remind herself constantly of who she was doing this for. “Because I love Boxing so much and I had a vision for myself, I never lost focus. I was doing this for no one else but myself,” said Ali. Laila Ali started her Boxing career in October 1999 at the age of 21. She earned the Super Middleweight Championship in the Women’s International Boxing Association in 2002.

In 2004, she earned the international Women’s Boxing Federation’s Light Heavy-weight title. Ali retired from boxing in February 2007 with a perfect record of 24-0.

Ali’s speech at the performing arts center was about going after what you want in life. Ali shared her pursuits that succeed and the ones that failed. This gave her a vulnerable feel that people connected with that night. “People would be surprised by some of the things that I have been through. They assume I grew up a certain way and had a silver spoon in my mouth which wasn’t the case,” said Ali. In her teenage years, Ali ran with the wrong crowd and shoplifted from stores. She was caught and was put in the juvenile detention system which shocked a few people since her father provided a privileged life. Ali also shared how her father tried to talk her out of boxing at the beginning of her career. Her father was a big influence in her life. He showed her how to be kind to all people. Muhammad Ali’s advocacy made Laila Ali aware of how the world real is.

Muhammad Ali passed away on June 3, 2016, to Parkinson’s disease. She opened up about that in her speech. “Him not being here has not been easy but knowing that he had a progressive disease we were able to prepare for it. We love and miss him but we have comfort knowing that he is no longer suffering,” said Ali. The speech concluded with Ali explaining that we progress in life through the mistakes we make. “You just have to make the moves or otherwise you’re going to be standing still in life. I have met so many people that have held things back. I don’t want people to do that. I want them to go after the greatness that is inside of them,” said Ali.