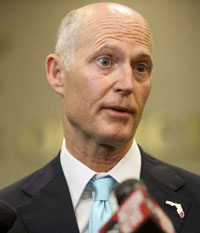 Gov. Rick Scott and the Florida Cabinet have a chance to right a wrong of their own making. They can – and should – comply with a court order to create a reasonable process to restore voting rights to exprisoners.

U.S. District Judge Mark Warner ordered the state to develop a new method of deciding when and how convicted felons can regain their voting rights. The ruling gives the Florida Cabinet one month to create a new clemency process that consists of standards, not whims. In the words made famous by the governor himself: it’s time to ‘get to work.’

Given our state leaders’ track record, it’s fortunate that Florida voters can go to the polls this November and approve the felony voter-rights restoration amendment. This change to the state constitution should protect a felon’s rights from the fickleness of the Florida Cabinet that seven years ago dismantled what had been the makings of a legitimate clemency process and replace it with an administrative beg-a-thon.

Florida is now one of only three states that imposes lifetime disenfranchisement for people with felony convictions. The only way a convicted felon can regain his or her voting rights in Florida is to apply to the state Office of Executive Clemency and pray their application is granted – a rare outcome, according to state figures.

Under Gov. Scott, only 2,488 applications for restoration of civil rights have been granted, a drastic drop from his two Republican predecessors.  Former Gov. Jeb Bush restored the rights of 73,508 from 1999-2007. Former Gov. Charlie Crist, who instituted automatic restoration of voting rights for non-violent felons, restored 155,315 between 2007 and 2011.

Contrast Florida’s restrictive process to those of other states, where tough on crime policies give way to commonsense criminal justice.

Convicted felons in Indiana, Illinois, Montana and Utah regain their voting rights automatically once they are released from prison. In New York, Colorado and California, voting rights are automatically restored after release from prison and discharge from parole.  There is no need to restore voting rights to ex-prisoners in Vermont and Maine as those states have no disenfranchisement for people with criminal convictions.

As a tool of voter suppression, felony disenfranchisement has no equal. More than 6 million Americans are unable to vote because of past criminal convictions and many of them have successfully made the transition from prison to being productive members of society.

It should be an easy call for Gov. Scott and members of the Florida Cabinet to change the process to automatically restore voting rights after prisoners have served time and made financial restitutions. Once felons pay their debt to society, they should be allowed to vote.

The Sunshine State can end this blatant practice. Our state leaders should take the lead, do the right thing by complying with the federal court and come up with a credible voter restoration process for felons.

Turning the clock back on Voting Rights

of the Voting Rights Act that requires that areas with histories of past discrimination have changes to voting laws and boundaries monitored by the Justice Department. […]

John Lewis’ Message to Justice Scalia: Voting rights are ‘what people died for & bled for’