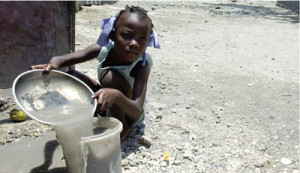 Studies indicate the population Haitian of child domestic workers rose from some 172,000 in 2002 to roughly 286,000 in 2014 — four years after an earthquake flattened much of Port au Prince and outlying areas, killing as many as 300,000 and leaving some 1.5 million people homeless.

Now child advocates in the hemisphere’s poorest country are bracing for yet another in-crease of youngsters like Watson driven into unpaid servitude.

The Trump administration is weighing an end to a humanitarian program that has protected nearly 60,000 Haitians from deportation since that earthquake — a “temporary protected status” based on the assumption their homeland could not absorb them following the disaster. If the program known as TPS is not extended, people could be sent back to Haiti starting in January.

Such mass deportation would cut off remittances that keep many Haitian families fed in a country where deep poverty is the primary force behind the restavek practice.

Social researchers in Haiti say the cultural practice is complex, even though it’s often de-cried as a form of modern-day slavery. A 2015 study commissioned partly by Unicef found that roughly 25 percent of Hai-tian children between 5 and 17 live apart from their parents, though most live with relations and not all are child domestic workers.

An estimated 30,000 children also live in residential centers in Haiti. Though often described as “orphans,” the vast majority of the children have at least one living parent and have been placed in the often poorly regulated centers because their families cannot support them or pay for their schooling, child welfare advocates say.

“In some regions of the country it’s even considered an honor to send their children to the city,” said Mariana Rendon, protection officer with Haiti’s office of the International Organization for Migration.

Glenn Smucker, a cultural anthropologist known for extensive work on Haiti, said that children staying with people other than their parents are more vulnerable to abuse and heavier workloads, but that their treatment varies a great deal.

of placing children outside the home generally includes an understanding that the receiving household will send the child to school in exchange for doing household chores, in a social and cultural context where children are expected to do work whether they live at home or with others,” Smucker said.

For some kids, the arrangement works out. They’re treated well, often with extended families, and caretakers pay their school.