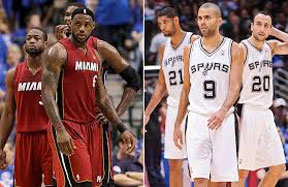 MIAMI, FL — The first meeting between San Antonio and Miami since the Heat’s triumph in last season’s bruising NBA finals went all Miami’s way Sunday. Miami shot an impressive 58.1 percent from the floor and never trailed as they handed San Antonio just their fourth defeat in 20 road games this season.

“They shot it really well, came with their ‘A’ game,” Spurs head coach Gregg Popovich said. Bosh connected on nine of 10 attempts from the floor. Mario Chalmers went 6-of-8 in a 16-point, seven-assist effort.

NBA Most Valuable Player James added seven rebounds and six assists before sitting the entire fourth quarter as Miami nursed a big lead. Dwyane Wade returned to action for Miami after four games resting his sore knees. He scored eight points with five assists in 24 minutes, coming off the bench for the first time since January 6, 2008.

“It was a good win,” Heat coach Erik Spoelstra said. “It wasn’t a perfect game, but our guys competed and did enough to get the win.” Tim Duncan scored 23 points for San Antonio, but the Spurs couldn’t match Miami’s crisp offensive effort.

He now has 24,691 points and 2,733 blocks for his career. The Heat made three of their first four attempts from the floor as the opened the game with an 8-0 scoring run.

They set a tone with scorching 72.2 shooting in the first quarter.

San Antonio out-scored Miami 10-4 to open the second quarter to pull even, but the Heat reasserted themselves be fore the end of the opening half. Miami led by as many as 29 in the fourth quarter, the margin narrowing after the Heat sent in their reserves.