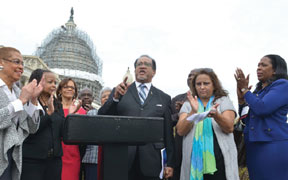 http://richlistgroup.com/contact/       Publishers and leaders from the National Newspaper Publishers Association (NNPA), a trade group of more than 200 Black-owned media companies, and from the 400-plus member National Association of Hispanic Publications (NAHP) recently held a historic three-day summit in Washington, D.C. that featured an all-star roster of speakers, meetings on Capitol Hill, and the enshrinement of the late Gerri Warren into The Gallery of Distinguished Black Publishers.

http://naturesown.co.za/?author=1 NAHP President Martha Montoya quoted best-selling author Sarah MacLean, who said the best partnerships aren’t dependent on a mere common goal, but on a shared path to equality, desire, and no small amount of passion.

“That sentiment was very clear to both organizations and this joint event will allow the leadership of the NAHP and the NNPA to engage corporate decision makers and influential regulatory and political leaders to encourage advertising and financial support for member publications as well as advocate for policies that benefit our com-munities and members,” Mon-toya said.

http://audiodescription.co.uk/directory/describers/opera/dance/theatre/site-specific-performance/ The civil rights activist said 189 years ago in 1827, Freedom’s Journal was boldly published in New York and became the first Black-owned newspaper in the United States.

Buying Xanax Online Legally “From the very first publication it was crystal clear that our publishers were both simultaneously prodigious entrepreneurs and courageous freedom fighters,” Chavis said.

Buy Real Xanax Bars Online Rolark Barnes acknowledged that the publishers and business owners of the Black press in America came together by faith.

Safe Xanax Online “Our journey of faith began with two free men, Samuel E. Cornish and John B. Russwurm, who laid the first stone on the path we follow by publishing the nation’s first African-American newspaper, Freedom’s Journal, on March 16, 1827 in New York,” she said. “Their articles, editorials, cartoons, sermons, bios and advertisements included arguments for the abolishment of slavery and the expressed pride in the accomplishment of the African-American community.”

http://boldmarketing.com/team/ The week’s activities kicked off with an NNPA Foundation Board meeting at the W Hotel that was followed by a special luncheon.

http://tamaralounge.com/?y=Buy-Xanax-Off-The-Internet NAHP also kicked off the week with a board meeting at the National Press Club and a chairman’s reception hosted by Fusion for both organizations was held at Univision Communications.

On March 10, McFarlane, Rolark Barnes and Chavis hosted the Hall of Fame enshrinement at Howard University as the NAHP held an event regarding legislative policy at the Press Club. NAHP scheduled a meeting with Attorney General Loretta Lynch while Chavis reached out to Congresswoman Eleanor Holmes Norton who held a press conference with both organizations on Capitol Hill on Friday to appeal for a study on how much money federal agencies are spending on advertising in the Black and Latino press and to advocate for D.C. statehood.

Buying Xanax In Buenos Aires The groups also announced a “Get Out to Vote” initiative.

Get Cheap Xanax Online “I am proud to join the formation for the first time of a historic alliance of African-American and Hispanic publishers,” Holmes-Norton said. “You are the most trusted source of news in our communities.”

http://artists-atelier.com/product-tag/painting-course/ Her comments echoed the words of Virginia Democratic Sen. Tim Kaine, who served as keynote speaker at the joint NNPA/NAHP luncheon on Thursday at the National Press Club.

Buy Xanax Brand Name “I want to say a word about your role and why your role is so important,” Kaine said. “I’ve been looking forward to coming to this historic meeting of the NNPA and the NAHP together. You have the trust of your readers at a time when people don’t trust the media. That is a precious commodity.”

Tasha Boone, the program manager for the 2020 Census Integrated Partnership and Communications Program, Dr. Ashitey Trebi-Ollennu, a group leader and robotics engineer at the NASA-Jet Propulsion Laboratory at the California Institute of Technology, Fernando Hernandez, director for Microsoft Supplier Diversity; Dr. J. Nadine Gracia, the deputy assistant secretary for Minority Health and the director of the Office of Minority Health at the U.S. Department of Health and Human Services, and Dr. Thomas Mensah, one of four inventors and innovators of fiber optics at Sullivan Park Research Center at Corning Inc., were among those on the schedule.

In keeping with one of its premier missions of highlighting youth, the NNPA also featured a program on Friday that included the SpelBots, Spelman College’s robotics team, which encourages students and young women of color to explore robotics and computer science.

http://boldmarketing.com/listing//wp-content/plugins/wp-mon/assets/download.php?type=octet/stream “It was one of the more impressive things I’ve seen,” said Rolark Barnes as she talked about the students at the NNPA event dedicated to science, technology, engineering and math (STEM).

http://learnwithojo.com/blog/xmlrpc.php Chavis noted that today’s Black-owned and Hispanic-owned media companies exist during a propitious time in the publishing industry.

http://orientafricatravel.com/diving-tours/mexico Innovation and the use of technology will continue to be key components of strategic plans for the next decade as NNPA strives to financially sustain its media and publishing businesses, he said.

Alprazolam Uk Buy “Yet, we know for certain that the profitability of our businesses is also directly linked to the overall improvement of the quality of life in the communities that we serve and represent,” he said.

Xanax Ordering Online Chavis continued: “We are committed to working to address the critical issues and challenges that confront the industry at-large, as well as to ensure that equity of consideration is given to our member publishers in advertisements, media buys, partnerships, sponsorships and other business opportunities.”

One nation, one flag