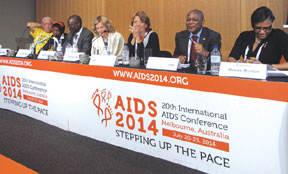 By Linda Villarosa Special to NNPA from The Black AIDS Institute

MELBOURNE, Australia – Steven Watiti was diagnosed with HIV in 1993. His wife was pregnant with their second child when she died of the disease, along with their baby. “That left me with my daughter who was four,” said Watiti, a Ugandan physician. He spoke on a panel at the International AIDS Conference here last week about people who have lived with HIV for 20 years or more. “I thought I’d be dead by the year 2000, and my daughter would join a long list of orphans in Uganda,” he said.

Overcoming meningitis, TB and Kaposi sarcoma, Watiti held on until anti-retroviral medication saved his life. He went back to work and now talks openly about his HIV status with his colleagues and patients. “I am 61,” he said to loud applause. “I have lived half of my life with HIV.”

Several other so-called 20-plus positives joined Watiti, including the moderator Suzette Moses-Burton, executive di-rector of the Global Network of People Living with HIV. She was diagnosed with the virus in 1992, and was told she had two years to live. Twenty-two years later, she says, “I now face a whole host of new problems, and that’s what we’re here to talk about today.”

Long-term survival is a hot topic here, and over the week, a number of panels examined issues related to aging with HIV.

Lwendo Mbulo has been living with the virus all 23 years of her life, though she didn’t find out until age 14 when her parents shared the news. “They told me ‘you got it from us,’” said Mbulo, a member of a people with AIDS group in Zambia.

Though at first she felt like her dreams had been shattered, now medication, support and motherhood have turned her life around. “I can now stand up for my fellow youth to be a voice for them,” she says.

The experiences of the 20-plus positives differ from those of the newly infected, explained John Rock, a treatment advocate based in Australia. He was diagnosed with HIV 34 years ago.

“Many of us feel like we lost what could or should have been the best years of our life,” he said. “We missed our 30s, our major earning power. We do have good treatments but I have to see a lot of doctors – six specialists.

“For people who were diagnosed in 2000 or after, it’s a very different situation,” Rock suggested, referring to anti-HIV medications, or ARVs. “They are more likely to have started ARVs before there was damage to the immune system. We don’t know the long-term consequences of ARVs, but they work and lead a pretty normal life.”

The panel also included representatives from The Global Fund to Fight AIDS, Tuberculosis and Malaria, PEPFAR and UNAIDS responding to the comments of the long-time positives and discussing policies and solutions. But when it was their turn to comment, the temperature went from simmer to boil when one of the officials urged the longtime positives to be less quiet and ask for more. That’s when Burton exercised her moderator’s prerogative and let loose a string of blunt, unvarnished remarks.

“While I have no intention of being confrontational and certainly not to Ambassador Birx, I do have a response for you,” said Moses Burton. Deborah Birx oversees PEPFAR, the multi-billion dollar U.S. program aimed at fighting HIV worldwide.

“Part of the reason the voices seem to be quiet, is because the reality is we are tired. I am tired of having to say the same things, to the same circles, to the same people, day after day, week after week, month after month, year after year. I’ve been saying the same thing for 22 years.”

Her voice shaking as she teared up, Moses-Burton continued. “I speak so passionately to our partners especially: help us not be so tired. Help alleviate some of this burden of carrying this thing, all of this responsibility, not just for ourselves, but for our entire community. That is a tremendous burden that nobody prepared us for.”

The tension passed; the community is small and there was no residual drama or ill will between two committed women focused on a shared goal. But the event offered a rare, uncensored moment outside of the more informal and community-oriented Global Village, which is open to the public as well as conference delegates.

In the end another policymaker on the panel bridged the divide between the long-time positives and the officials. “People on the policy side are also close to the realities,” said Mbulawa Mugabe, a UNAIDS deputy director, originally from Botswana. Over a decade ago, he learned that his sister had developed AIDS. Now she’s a grandmother.

“At some point today’s babies born with HIV will be 20, 30, 50,” Mugabe said. “When they begin to age, their needs are going to change, and we have to make sure that at every stage in their life course we can respond and respond appropriately.”