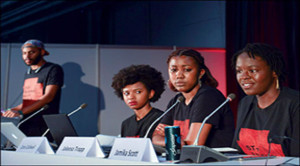 While all other demographics are in decline, more and more young people are being diagnosed with the disease. Globally, 11.8 million people ages 15-24 are currently living with HIV/AIDS, with this demographic also accounting for more than half of new infections. In the U.S., young Black, gay and bisexual men make up the largest population of people who are infected, and young women of color bear the largest burden of the disease among women in the U.S. Globally, adolescent and young women are fast becoming the most at risk: in Sub Saharan Africa, women ages 15 to 19 make up two-thirds of the population of infected adolescents.

Despite these alarming numbers, we do a poor job reaching young people, preventing the disease in our population. Worse, we are an activist generation, who care deeply about social justice and human rights. Yet few of us have become energized or involved in the fight against AIDS.

As a millennial, I have not seen a world without HIV/AIDS, and yet it seems like a disease of the past—something terrible that happened to my parents and their friends in the ’80s, not an issue that affects me. And for those of us active in other movements like feminism, LGBT and Black Lives Matter and interested in issues of all kinds—from poverty and hunger, to police brutality, trafficking, and mass incarceration—HIV/AIDS is rarely on our radar, though it lies at the intersection of other issues.

In college, the epicenter of sexual-health discussion, we talk about avoiding pregnancy, with an even larger urgency placed on ST prevention, but never about HIV. My friend Chloe, a peer health educator (PHE) at my college said she was never trained on HIV prevention and has yet to make it into the conversation of her work and maintaining students’ sexual health. And worse, in the midst of this eras “hook-up” culture, the commonplace of multiple partner sexual practices perpetuates the risk of contracting the disease, and still, it maintains a lackluster, even inexistent place within our sexual consciousness.

Even among young gay and bisexual men, who initially bore the brunt of the disease and its associated deaths, discussion remains unsophisticated and un-textured. My friend Wen, an openly gay 20-year-old from Brooklyn, told me: “The disease is seen as a joke, but those diagnosed are shamed. There still remains a lot of stigma around the disease and people are scared to get tested.”

What about PrEP, which didn’t exist for previous generations, but can prevent the disease in young men (and women)? “For them it’s even worse,” Wen stated, “people who use PrEP are referred to as PrEP sluts.”

Sadly it is not only peers that perpetuate the stigma, but even well-meaning older generations don’t know how to talk to us in order to stop the spread of disease, and most conversation often results in moralizing and victim blaming. Just listen to the floor of the Republican convention. But it’s not just the political right; even progressives and our parents tend to blame youth when they are often unwilling to engage us in conversations about sex and sexuality, or advocate for comprehensive sex education in American schools, where abstinence education and silence are the rule.

But this stigma often perpetuates the risk of these already vulnerable communities. A study of over 15,000 high school boys released by the Centers for Disease Control and Prevention earlier this week found that gay and bisexual teen males were no more likely than their straight peers to engage in risky sexual behavior, but still had a higher chance of contracting HIV. It was actually homophobia, bullying and violence that spread the disease—not promiscuity, alcohol and drugs and avoiding condom use.

Similarly, in Africa, sexism, gender imbalance and gender-based violence are driving the disease. Unlike in the U.S., African women are aware of the disease, but may feel powerless to avoid it. “We always think about it,” said Nachizia Namocanga an activist from Zambia. “Contracting HIV is an everyday thing for us. “

Another young woman I spoke to here was even more blunt: “When engaging in a sexual experience, it is always the decision of men about when, where and how a sexual act takes place.”

How are we reaching women like these in order to change the narrative? No one is entirely sure.

But some people and groups are trying to find creative ways to make a difference, At the opening ceremony of AIDS 2016, actress Charlize Theron noted that young people will end the epidemic. To help, she created the Charlize Theron Africa Outreach Project which supports community-based initiatives that target adolescents affected by HIV. That group co-sponsors #GenEndIt, a movement to “rewrite the HIV/AIDS narrative” to include young people.

The U.S. government recently joined with several partners to launch the DREAMS project which will use $85 million to target young women in 10 Sub Saharan African countries. DREAMS, which stands for Determined, Resilient, Empowered, AIDS-free, Mentored and Safe, will address the structural drivers that directly and indirectly increase girls’ HIV risk, including poverty, gender inequality, sexual violence and lack of education. And most importantly, new social-media forms, such as the I’m a Survivor campaign, have created an online network, similar to Facebook, for HIV-positive individuals to connect with one another, become mentors/find mentors, and share experiences.

But even with all these new aids, what’s most important is that young people realize the remaining vastness of the disease, and specifically, as Naina Khanna, executive director of Positive Women’s Network USA explained, “young people must understand that HIV is never one dimensional. It is always intersectional.” As millennials we are already empowered, we are angry, but we have the agency to combine our efforts and be the generation to end the AIDS epidemic.

Kali Villarosa is entering her junior year at Skidmore College, interning this summer at the Ford Foundation, and this is her third time reporting from the International AIDS Conference.