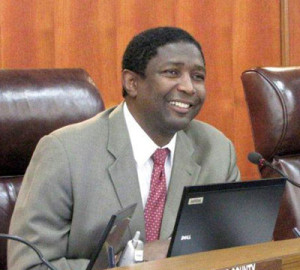 Holness Pushes to Keep People Out of Jail

The importance of those in attendance from the judicial and court system is to be noted as Clerk of Court Brenda Forman offered her office as a centralized clearing house for information needed by law enforcement to implement the program, an important component needed by law enforcement.  Broward County Public Defender Finkelstein thanked Commissioner Holness for introducing this item championing this issue   Finkelstein gave a history lesson as he brought to everyone’s attention for the past 60 years Broward County has had an institutionalized racist justice system.  He shared The Sarasota Tribune did a study that showed African Americans are not only arrested at percentages that are completely dramatically inconsistent with white people but their sentences are also far more harsh.  “We have created a Jim Crow criminal justice system where when you walk into the courtrooms in Broward County almost every single person in that courtroom that’s handcuffed is black and when you put all of your law enforcement officials in poor black communities, don’t be surprised that the people that get arrested are poor and black.  This bill will allow law enforcement to continue doing what they’re doing but at the same time not inflict the damage that has been done to the African American community in Broward County for the past four decades.   We owe this to poor communities of color to start taking steps to remedy the harm that we have inflicted for the past four decades,” said Finkelstein.

Commissioner Holness has spent over a year tirelessly working on this effort, meeting with the City of Fort Lauderdale Commission, Broward County Sheriff Scott Israel, Office of the State Attorney, The Public Defender’s Office, the chief of police from Fort Lauderdale, and other community stakeholders. “Over this process I’ve learned there are a lot of low-income people in our jail system because of petty theft.  Judge Tuter pointed out someone could go to a Wal‑Mart and steal $18 worth of items, would be caught, give back the goods to Wal‑Mart, yet the police officer would spend three hours booking that person downtown and then the person gets locked up.  They have a $500 to $2,000 cash bond they cannot pay, they couldn’t afford it in the first place, and they are kept in jail, costing $140 a night.  We’re spending about $230 million annually on our jail system, which is unsustainable.  The civil citation program for juveniles has had a 94% success rate, which comes at a savings of $14 million for tax payers,” said Commissioner Holness.

According to the American Bar Association, individuals who are locked up due to have little to no impact on public safety. With the court system overburdened with minor offense cases, an arrest record can have long term impacts on employability, housing, not to mention the economic impacts.

“Contrary to what some believe, this program is practical and prudent and will hold people accountable for their actions, but if we do not give people a chance they get caught deeper in the system.  Holistically this program will benefit our community tremendously and will empower people not to be branded at a young age as a criminal,, as most civil citations are issued to people under the age of 30,” said Commissioner Holness.