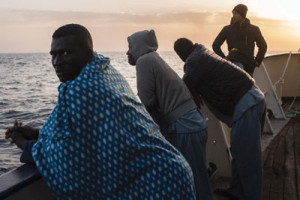 The horrors of abuse, racism, and death that African migrants encounter along Libyan Route to Europe

In an extraordinary move, a German newspaper Der Tagesspiegel recently wrote a powerful tribute to more than 33,000-strangers, the majority of them Black, by filling the popular European daily’s pages with a list of their names.

Unfortunately, none were alive. The migrants, refugees and asylum seekers all perished over the past 25-years in their desperate attempts to cross the Mediterranean and get to what they believed, “a safer and better existence in Europe.”

In 2016 alone, the U.N. reported that over 5000 went missing or died, trying to cross over. Thousands would’ve passed through Libya since the northern African country has the most popular and largest route for African migrants trying to make it to Europe.

In October 2011, migrants escaping poverty and conflict from western African states like Nigeria, Gambia and Mali risked crossing the Mediterranean.

As a result, thousands were detained either by smugglers, government security forces or militias—where they were sexually abused, beaten, starved, killed, extorted or sold in public slave markets.

In August, the Italian government lifted a finger. But it was not a helpful one.

“The Italian government has shown that for them, it’s more important, keeping migrants and refugees away from their seashores than to protect their welfare and lives,” said deputy director for Amnesty International (Europe) Gauri Van Gulik.

“Facilitating  the return and interception of migrants and refugees  to Libya results in them being detained where they’re raped, tortured and killed.”

Although the new policy has decreased migrants rates using the Libya-to-Italy route, migrant traffic on various alternative and (even more dangerous) routes have in-creased.

An evidence of how Italian new policy is hurtful is the recent horrific discovery of the 26 bodies of teenage migrant girls dumped in the Mediterranean. Italy is unsure if the Nigerian girls ,ranging from 14-18 years-old, drowned during on their attempted journey or were murdered on the way and thrown at sea.

And while the population of migrants attempting to cross Mediterranean—from Libya to Italy—has declined with the new Italian policy, deadly alternatives like Tunisia have now become major routes.

“Those migrants are African, and nobody is interested in them,” a Tunisian fisherman Chamseddine Marzoug, says. “If it had been men with green eyes and blond hair, you would all be interested.”

Marzoug stressed how Italy and the European Union is wasting a lot of Euros on border control, instead of investing in people in the countries where the migrants are fleeing.

“Trump, racism and the Republicans Party”

“Trump, racism and the Republicans Party”

The Waco biker riot and the lexicon of racism

The Waco biker riot and the lexicon of racism
[…]

Is Segregation & Racism Truly Over?

Racism still alive, they just be concealing it. It’s sad that the last sentence that you read still applies today. What’s not sad is the fact that there are no more segregated schools in Florida. […]