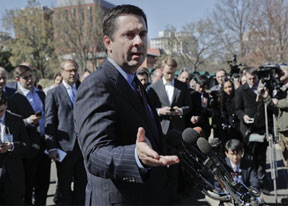 Nunes, speaks with reporters outside the White House on Wednesday following a meeting with President Trump. Rep. Devin Nunes (R-CA) claims to have evidence that President Donald Trump was surveilled after all.

During a House Intelligence Committee hearing on Monday, FBI Director James Comey and NSA Director Mike Rogers both said they know of no information supporting the president’s allegation. They also confirmed that President Trump’s connections with Russia are under investigation. On Wednesday, however, Nunes called a press conference and said he “recently confirmed that on numerous occasions the intelligence community incidentally collected information about US citizens involved in the Trump transition.”

He framed his claim as big news. “I’m actually alarmed by it,” he said, adding that the intelligence in question was gathered separately from the investigation into Trump’s Russia ties, which has been active since July.

But incidental collection isn’t uncommon when American citizens are in touch with foreign agents. Leaks regarding Michael Flynn’s talks with the Russian ambassador were what led to Flynn’s ouster as Trump’s national security adviser, because they confirmed that he had misled Vice President Mike Pence regarding the substance of those talks.

Any intelligence report detailing communications between Trump transition officials and foreign agents would be classified. But instead of bringing whatever information he has to the attention of the intelligence community, Nunes addressed reporters and then headed straight to the White House to inform the target of an ongoing FBI investigation. A journalist at the press briefing asked him why that doesn’t constitute obstruction of justice.

After talking to the president, Nunes again faced the media and contradicted himself about what his evidence means, saying in the same breath that it both supports and refutes Trump’s wiretap allegations. He was also evasive about where the alleged surveillance occurred, who it targeted, and what form it took.

Like Trump, Nunes never provided any evidence to substantiate his claim. Nonetheless, right-wing outlets like Breitbart rushed to cover the development as though it validated the president’s discredited wiretapping allegation.

Trump’s campaign even fundraised off of it.

During the House Intelligence Committee hearing on Monday, Nunes responded to the intelligence community’s rejection of Trump’s wiretapping accusation—and the announcement of the FBI investigation—by asking investigators to take a fresh look at Hillary Clinton. The Trump administration recently enlisted him to talk to reporters and help knock down stories about ties between Trump’s inner circle and Russia.

On MSNBC, Jeremy Bash, former chief of staff for the CIA, said he’s “never heard of a chairman of an oversight committee going to brief the president of the United States about concerns he has about things he’s read in intelligence reports.”

“The job of the committee is to do oversight over the executive branch—not to bring them in to their investigation or tip them off to things they may have been looking at,” Bash added. “I’ve gotta believe other members of the committee are horrified at what they just witnessed.”

UPDATE: In a statement, Rep. Adam Schiff (D-CA), ranking member of the House Intelligence Community, released a statement saying that whatever information Nunes has “should have been shared with members of the committee” before the president was informed.

“The Chairman also shared this information with the White House before providing it to the committee, another profound irregularity, given that the matter is currently under investigation,” Schiff said. “I have expressed my grave concerns with the Chairman that a credible investigation cannot be conducted this way.”

As chair of the Intelligence Committee, Nunes is currently overseeing the House’s investigation into Trump’s ties with Russia. But in a news conference held shortly after his statement was released, Schiff said Nunes’ actions indicate an independent commission may now be needed.

This Isn’t Your Grandparent’s Election

This Isn’t Your Grandparent’s Election […]