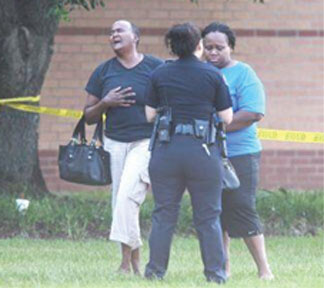 A fight broke out at a Houston-area high school leaving several students injured and one student dead. The incident left three people injured and one 17-year-old boy fatally stabbed.

Adrian Garcia, the sheriff of Harris County, says that at about 7 a.m. on Wednesday an altercation began at Spring High School in Spring, Tex., which is about 20 miles outside of Houston. Though the authorities are not sure what started the fight, they do know that when the confrontation continued to escalate weapons were involved which lead to numerous stabbings. What is the most concerning is that all of the people reported to have been involved in the fight were students at Spring High School.

Investigators are busy questioning three “persons of interest” at this time. Outside of that, the police are not looking for any other suspects. Two of the injured students are in the hospital recovering from injuries that are minor. The third injured party was airlifted to the Houston hospital and is now considered to be in good condition.

Initially it was not reported by the Harris County Sheriff’s office whether or not all of the people involved in the altercation at the school at 7 a.m. were students or not. One parent of a sophomore boy, Lakesia Brent, says that her son told her that one student was on a stretcher being flown out to the hospital and many others were injured.

According to an air ambulance dispatcher at Memorial Hermann-Texas Medical Center in Houston, a 16-year-old boy was airlifted there. Spring High School Officials refuse to comment, but following the incident the school went into lockdown. After the lockdown ended students were returned to their parents. Students, like Brent’s son, were texting their parents to pick them up during the lockdown because they were afraid.