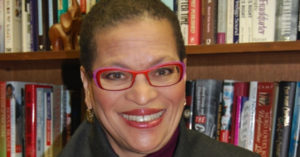 The April unemployment rate, at 3.6 percent, is at its lowest rate since December 1969. Payroll employment increased by more than 250,000, outperforming expectations and reversing the disappointing job creation numbers of last month. First quarter growth was reported at 3.2 percent, a robust figure that exceeds estimates, earlier this year, that growth would be somewhat slower. This perhaps gives the man who lives in the House that Enslaved People Built something to crow about since he so enjoys crowing. But many economists are waiting for the other shoe to drop, having workshops and forums about the coming recession. And as positive as the numbers seem, there are always gaps and inequities reflected in the fine print.

Take the unemployment rate. It declined overall, and for adult men and women, whites, Asians and Hispanics. At the same time, the unemployment rates for African Americans and teenagers were unchanged. The Black unemployment rate, at 6.7 percent, is more than twice the white rate of 3.1 percent. This ratio of 2.16 percent is higher than the usual 2:1 unemployment rate, widening inequality. Should African Americans really celebrate a strong labor market when so many are sidelined from it? Despite claims of economic improvement and an improvement in some of the indicators, the fact that others remain stagnant is telling. For example, 1.2 million people have been out of work for more than half a year. They represent one in five of the unemployed. The number may seem small, but the persistence of unemployment for some individuals should be troubling for those who make public policy.

The number of people who are considered “marginally attached” to the labor force, which means that they’d work if they could find work, but they’ve ceased to look, is the same as it was this time last year. These marginally attached workers include discouraged workers, and there are nearly half a million of them, again the same as last year. With these numbers being at the same level as they were a year ago, there is an indication that the 3.6 percent unemployment rate that is being hailed as so historic is a false indicator of progress. While employers are clearly hiring, they aren’t hiring enough people to make those at the bottom confident enough to look for work!

The labor force participation rate is also falling, again suggesting that our “strong economy” is not pulling enough more people into the labor market. Instead, some are leaving! Why? Even though wages grew at 3.2 percent last month, which is more than they increased last year, they have not yet reached the 3.5 percent level that the Federal Reserve Bank would consider healthy. Thus, the Fed indicated that they change the interest rate, although 45 has pushed for a full percentage point drop in the interest. I’m not sure what part of the Fed’s independence he fails to understand!

The Fed’s decision to hold interest rates constant is partly a result of weaknesses in the first quarter growth report. It’s always good news when the growth rate is more than 3 percent, but consumer spending is down for the third straight quarter. While the words “government shutdown” have not been uttered recently, the 2018-2019 35-day shutdown clearly had some impact on consumer spending. Many expected that purchases deferred in January and February might be realized in March, but too many consumers who are still recovering from the shutdown and many, who are not government employees but contractors, who lost roughly 12 percent of their annual income. They won’t be doing much discretionary spending this year!

How strong is our economy? It is undoubtedly stronger than it was a year ago, but it’s not as strong as some claim that it is. Labor market weaknesses and inequality are of particular concern to African Americans. Companies are hiring, but they aren’t hiring enough African Americans to close the unemployment rate gap. There is legislation that might improve the economic status of African Americans. HR 7, the Paycheck Fairness Act, would provide remedies to close the gender pay gap. Congressional Black Caucus member Bobby Scott (D-VA) introduced the Raise the Wage Act, HR 582. It would provide increases in the federal minimum wage to $15.00 by 2024. According to the Economic Policy Institute, the legislation would give African American workers a 38 percent pay increase (compared to 23 percent for white workers). And when workers earn more, they can spend more, strengthening economic growth.

Whenever you hear the words “strong economy,” think of the folks at the bottom. While the top one percent are certainly benefitting from growth and expansion, those at the bottom haven’t yet benefitted. Indeed, some have yet to recover from the Great Recession. Why aren’t the needs of those on the bottom, those who are poor (the data says 40 million people, but Rev. William Barber says it’s more like 140 million) significant enough to address?

“We send our children to school to get an education and learn to be future leaders in the world. We put our tax dollars into public schools, trusting that the institutions will make sure expectations are carried out in a safe environment,” Hudson said. “It’s obvious expectations are not being met in the Penns Grove-Carneys Point School District.” […]