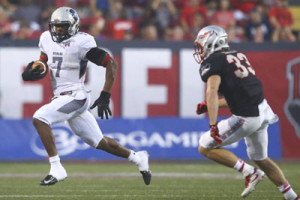 This past Saturday Howard traveled to Nevada to take on the UNLV Rebels in an exciting high scoring football game. Caylin Newton, the younger brother of NFL quarterback Cam Newton, had an impressive rushing game with 190 yards and two touchdowns on 21 carries, while going 15 for 26 for 140 yards with one passing touchdown and one interception. His longest run of the night went for 52 yards. Under the new head coach Mike London, who led Richmond University to an FCS championship, Howard entered the game as 45 point underdogs, and they stunned the Rebels by defeating them 43 to 40. Howard has pulled off the biggest upset in modern college football history, by point spreads. Howard was not favored to win this game, but they went to Nevada and took care of business. Anthony Philyaw also contributed with 20 carries for 71 yards and two rushing touchdowns. He was also their leading receiver with 62 yards on 3 receptions with his longest catch being 42 yards. With such a high scoring game, UNLV didn’t go down without a fight. Armani Rogers was 11 of 19 for 220 yards and one touchdown. Lexington Thomas also put up a big performance rushing for 151 yards on 21 carries and 2 touchdowns with his longest run of the night going for 35 yards. Charles Williams also contributed with 93 yards on 12 carries. The Rebels leading receiver ,Devonte Boyd, had 105 receiving yards on four receptions and one touchdown.

Howard wasted no time, grabbing a 21 to 19 lead by halftime. Down by two, UNLV responded by outscoring Howard 14 to 7 in the third quarter. After starting the fourth quarter down by 5, Howard responded by outscoring the Rebels 15 to 7. Howard has made history by pulling off this big upset. This just goes to show that anything can happen in the sport of football.