Xanax Buying The Florida Department of Transportation (FDOT) is conducting a Project Development http://audiodescription.co.uk/directory/describers/ireland/museum-audio-described-guides/site-specific-performance and Environment (PD&E) Study for the addition of lanes to I‐95 in Broward County, Florida. The http://grosirrumahan.com/tag/ekspedisi-murah-surabaya PD&E Study limits extend from Stirling Road (SR 848) to north of Oakland Park Boulevard (SR 816). The primary purpose of this project is to enhance operational capacity and relieve congestion along the I‐95 corridor by converting the existing High Occupancy Vehicle (HOV)
lane to a tolled Express Lane and adding one additional tolled Express Lane to the median of I‐
95, in each direction. This also provides for the opportunity to incorporate regional express bus
service. Various alternatives are currently under consideration.
As part of the PD&E study, FDOT is conducting historic research on North Woodlawn
Cemetery. Although the planned highway improvements will not impact the cemetery, FDOT is
seeking additional information on its history, particularly with regard to the “potter’s field” that
once was present just to the west of the existing boundaries of North Woodlawn.
North Woodlawn Cemetery was established during the 1920s, northwest of the present
day intersection of NW 9th Street and NW 19th Avenue. It is the resting place of many
prominent members of Fort Lauderdale’s African‐American community, as it was the only
cemetery in which African‐Americans could be buried from the time segregation laws went into
effect in 1927, until the Sunset Memorial Gardens opened in 1962 and racial segregation ended
in 1964.
There are few remaining historical records related to the cemetery, and no map of its
original boundaries exists. The first available historic map of North Woodlawn Cemetery is from
1940. It shows four blocks of cemetery and a potter’s field at the west. A potter’s field is the
term used for the burial place of unknown or indigent people, and this section of North
Woodlawn Cemetery included burials of people who were unknown to the community and had
no local family and friends. In 1940, the cemetery was bordered on the east by NW 19th
Avenue, NW 9th Street to the south, NW 9th Place to the north, and NW 20th Terrace to the
west.
Throughout the history of North Woodlawn Cemetery, records of many of the burials
and their locations were not kept, and any that were kept have been lost over time. According
to research by local residents, more than 70 percent of the graves within the cemetery are
unmarked. This is both a result of graves not being marked originally, and headstones being
removed over time. Additionally, many of the unmarked graves originally had wooden markers,
which deteriorated or were removed over time.
In 1967, the FDOT purchased the potter’s field for the construction of I‐95, and the road
was built between 1972 and 1973. Burials continued within the cemetery after the construction
of I‐95, and during the early 1980s. However, during the 1980s and 1990s the cemetery
grounds were largely neglected and became overgrown and littered with trash. As a result, the
Woodlawn Revitalization Committee was formed in 1991 by Mary Foster, and its members
cleaned up the cemetery. Unfortunately, the cemetery continued to be neglected by its legal
owners, and by the mid‐1990s it was in poor condition again.
In 1996, because of neglect and code violations, the City of Fort Lauderdale seized the
property, and burials ceased. The cemetery was rededicated in 2002, after $250,000 was spent
on its revitalization.
In October of 2012, staff of the FDOT, the Federal Highway Administration (FHWA), and
Florida Division of Historic Resources (FDHR) met with key members of the local community to
discuss the currently proposed improvements to I‐95 in the vicinity of North Woodlawn
Cemetery. Important information regarding the history of the cemetery was gathered at this
meeting. Several local residents also suggested that an article in a local newspaper might be an
effective way to solicit additional information from the local community.
To provide additional information on Woodlawn Cemetery, please contact:
 Sandra Hodge at (800) 448‐0227, or via e‐mail at SandraH@c3ts.com, or
 Jim Pepe at (800) 654‐5913, or via e‐mail at jim_pepe@janus‐research.com, or
To learn more about the proposed improvements to I‐95 between Stirling Road and
Oakland Park Boulevard, contact Ray Holzweiss, FDOT Project Manager at (954) 777‐4425 or via
e‐mail at ray.holzweiss@dot.state.fl.us. Additional information concerning the project can also be
found at www.95StirlingOakland.com. 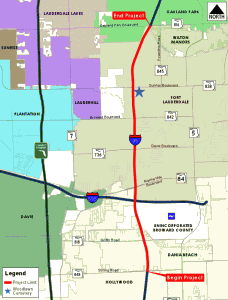