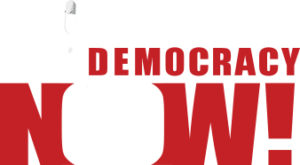 Congresswoman Ilhan Omar addressed a crowd of Black women leaders from around the country in front of the Capitol building Tuesday at a rally in her defense, following a series of right-wing attacks against her. Death threats against Omar have spiked in recent months after President Trump tweeted a video juxtaposing her image with footage of the 9/11 attacks. Congresswoman Omar is one of the first two Muslim congresswomen in history and the first member of Congress to wear a hijab. She has repeatedly been accused of being anti-Semitic for criticizing the power of the Israeli lobby in Washington and questioning U.S.-Israeli relations. Despite the threats, she has refused to be silent, continuing to speak out against racism, Islamophobia, right-wing violence and anti-Semitism. Omar—who was born in Somalia and came to the United States as a refugee—said on Tuesday, “I’m a survivor of war. And if I survived militia, I certainly can survive these people.” We play her speech. (SEE FULL SPEECH on www.thewestsidegazette.com)