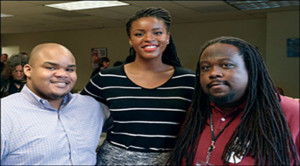 Javius Cain, a co-chair of BTAN Baltimore and a social worker at the Institute of Human Virology at the University of Maryland School of Medicine, Josephine Ayankoya, the mobilization coordinator for Black AIDS Institute and Jamal Hailey, co-chair of BTAN Baltimore and the director of programs for Special Teens At-Risk, Together Reaching Access, Care and Knowledge (STAR TRACK) at the PrEP training session for health care workers at the Department of Health and Mental Hygiene in Baltimore, Md.          (Freddie Allen/BAI)

The complicated history between Baltimore’s Black community and medical establishment has left many residents wary of health-care providers, making it much harder to reach at-risk populations with lifesaving HIV prevention and treatment messages.

With this in mind, on Nov. 5, 2015, the Maryland Department of Health and Mental Hygiene partnered with the National Minority AIDS Council (NMAC), the Black AIDS Institute and the Baltimore chapter of the Black Treatment Advocates Network (BTAN) to host the Baltimore PrEP Summit, a training session to help health-care workers and community-based groups improve awareness of, access to and community engagement around pre-exposure prophylaxis (PrEP).

Adoption of PrEP is slow

The summit, one stop on the Black AIDS Institute’s National PrEP Tour, provided a forum for information about how health-care providers, AIDS service organizations and the community can better address the region’s HIV/AIDS epidemic, according to BTAN Baltimore Co-Chair Jamal Hailey, who is also the program director for Special Teens at Risk, Together Reaching Access, Care and Knowledge, or STAR TRACK.

The region faces plenty of challenges in achieving the goal of increased PrEP uptake, especially in Black communities. Among them, concerns about costs and long-term health effects have caused some health-care providers and community members to be slow to adopt PrEP, Hailey said. In response to these concerns, presenters shared strategies to help alleviate PrEP’s cost, including helping people obtain coverage through the health insurance marketplace, as well as accessing Gilead Sciences’ patient-assistance programs, which offer up to $3,600 per year to offset PrEP’s expense. BTAN Baltimore Co-Chair Javius Cain, a social worker who primarily serves PLWHA, explained that the benefits of PrEP far outweigh the potential side effects.

Many health-care providers are simultaneously learning how to communicate to their patients about PrEP and working to improve their own cultural competence, Cain explained. Increasingly, community-based organizations (CBOs) and health departments are using social media and GPS-based dating applications to get prevention messages to hard-to-reach groups.

But one of the city’s biggest challenges is its history.

Read any report on HIV in Black America, attend any HIV conference or look up at an HIV prevention billboard and it’s clear who is most impacted by this epidemic in the U.S. […]