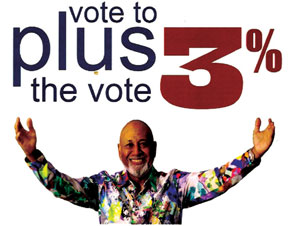 The general election is on!  Absentee ballots are being collected, early voting starts Monday, Oct. 20, 2014 and Election Day is Tuesday, Nov. 4, 2014.

Please vote! We all know how important elections are.

The following are some of my observations, prognostications, denunciations, ruminations and situations:

When is the last time you saw Rick Scott at an African American Church, Bar, School, N.A.A.C.P., Caribbean Festival, Urban League, or homeowners association? Oh, you are right; he was at one African American church, Sunday, October 12, 2014.  Now this guy must be getting pretty desperate, or is his compassion showing up three quarter years late?  Yeah right!  Vote him out of office! Make Florida Scott free!

Here are a few reasons to vote against Rick Scott and for Charlie Christ:

It is true that he restored 1 billion dollars to education later.  I have never been good at math, but last time I checked 1-1is zero.  So, generally speaking, we are right back where we started. Scott ran on a slogan of “Let’s get to Work” but he cut more than 7 billion in appropriated money for light rail in the I-4 corridor (Tampa to Orlando).  Incidentally, it took a bi-partisan effort more than 6 years to bring that money to Florida. The irony is that it would have provided at least 18,000 jobs.  Furthermore, the money went to Connecticut, Illinois, and California. Vote against this man!

The absolutely most egregious non-caring act of Scott and republican legislators was to not expand Medicaid.  This act or lack of action left nearly one million people without the most basic of medical insurance.  And it was done to spite the Presidents and Democrats action to provide affordable health care. This is OUTRAGEOUS!  Get him out of here! VOTE!!!

If re-elected Scott will get a chance to appoint right leaning ideologues to every level of the Judiciary. Observation. Every minority lawyer should be campaigning all day every day to avoid this backward lean in the Judiciary. Come on lawyers and everybody stop this. VOTE!!

This man, Scott, says he “cringes” when he hears the words “minimum wage”. Funny how a cringe worthy millionaire does not want people to have a living wage.  $10.10 is what Crist says he will do in state contracting.  That’s not enough in my considered opinion, but it’s a start and it does not make me “cringe”. Vote the cringer out of office!

Ok, you and all Floridians may have heard some of the 20 million dollars in negative ads against Charlie Christ. Notwithstanding the two candidates are tied in the polls. Why?  Because favorability rating is low. But bluntly, the majority of people don’t like this Scott guy. If you don’t like him and/or his politics, prove it. VOTE!!!!!

I thank the Westside Gazette for allowing me to put forth this editorial opinion.

Finally, on October 18, 2014 and October 25, 2014 starting at 9 a.m., some members of the Broward Black Elected Officials, SEIU and others will be walking in African American dominated precincts. Join us by calling (954) 494-7596, email carolineh@aol.com, post it on facebook#BBOEWalk.  Also, many churches will be conducting “Freedom Sundays” modeled after an effort by the Congressional Black Caucus of the US House of Representatives.

Next week: Who and what I support and why!