Up until last Sunday, that was the last time that the Miami Dolphins had won back-to-back home games. Dressed up in their throwback jersey’s the Dolphins played like it was 1972. In front of their crowd at Hard Rock Stadium, the Dolphins played up to expectations.

In a huge turn of events, the Dolphins took home another win this season. The Dolphins defeated the Buffalo Bills 24-17. With the win, the Dolphins now stay in third place in the AFC East and gain ground in the process. The Bills are ahead of them in the standings but they’re now only one game behind. 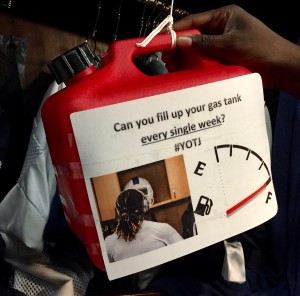 The biggest reason for the Dolphins success this game was because of Dolphins running back Jay Ajayi. After Ajayi’s monster performance against the Pittsburgh Steelers, the Dolphins gave Ajayi a gas can.

On the front of the can, it had a meter that was on full. The metaphor symbolized how the organization needs Ajayi to always be ready to perform and stay on full.

Against the Bills, the second-year running back had another special game. This game was so awesome that Ajayi became the fourth player in NFL history to rush for over 200 yards in back-to-back games. The other three people who did it are either in the Hall of Fame or on their way there. They are OJ Simpson who did it in 1973 and 1976. Earl Campbell who did it in 1980. Also, another Miami Dolphins running back, Ricky Wiliams who did it in 2002.

Ajayi became the fourth player in NFL history to rush for over 200 yards in back-to-back games. The other three people who did it are either in the Hall of Fame or on their way there. They are OJ Simpson who did it in 1973 and 1976. Earl Campbell who did it in 1980. Also, another Miami Dolphins running back, Ricky Wiliams who did it in 2002.

“They told me that and the backs that I’m in company with and that’s huge. Those are Hall of Fame guys, guys that I look up to at running back so it’s big” said Jay Ajayi.

Ajayi rushed for 212 yards, a touchdown and only had 28 carries. His yards per carry were an astounding, 7.6 yards.

Additionally, we have to talk about the way the defensive line was playing. Early in the game, defensive end Cameron Wake was making it a nightmare for Bills quarterback Tyrod Taylor. Wake finished with 1.5 sacks in the contest. However, he made it a routine to put pressure on Taylor. Moreover, Ndamukong Suh also got to Taylor and pile drove him into the ground for his lone sack of the game. Miami finished with eight quarterback hits, and four sacks. Taylor did his best evading the pass rush, but the Dolphins did a fantastic job containing him.

“We’re executing and obviously tackling and getting the ball carriers down. When they’re passing the ball we’re hitting the quarterback a majority of the time. Obviously, we have to clean some things up. There’s a big play we let out so we’re not perfect but I think we’re on our way to getting done what we want to get done and expecting at a high level” said Ndamukong Suh. “Force him (Taylor) to run a certain way. Don’t allow him to pick and choose. If he’s going to sit back there then obviously make a play but if, whether or not, coming from either side, we’re going to force him to go to one side or the other so we can bottle him up more or less.”

Last year Taylor came in and was a surgeon against this defense the way he cut the Dolphins defense open. This Sunday he was nowhere near as effective.

As for Dolphins quarterback Ryan Tannehill, he came into this game with five straight AFC East games throwing for 300 yards passing. That streak on Sunday was snapped because he finished with 204. His quarterback rating was a 99.4, he was 15-of-25 with a touchdown, and Tannehill had no turnovers.

Kenny Stills makes a nice adjustment and I couldn't be happier for him. Put the game away. Tannehill couldn't stop smiling. pic.twitter.com/OPVlbh43gr

“We’re just happy to win two games in a row. Obviously, it gives you a little bit of confidence, but we have been working so hard. So it’s a good feeling to know that the work and practice is showing up on the field, and that’s the biggest thing for us.”

With today’s win, the Dolphins continue to show they have a home field advantage. Miami has now won four of their past five home games. The last time they did that was during the 2012-13 season. The next game the Dolphins will play is against the New York Jets after their bye week.

Miami Dolphins: Could They Have the Best WR Duo in the League?

Here’s a throwback question to my Dolphins fans of the 2000’s. Remember how awesome it was to watch Chris Chambers dominate back during the beginning of the millennium? Chambers was so dynamic that it gave […]

To find the most talented premier athletes in the country then look no place further than South Florida. It’s not a secret to the rest of the country anymore because when it comes to athletics […]