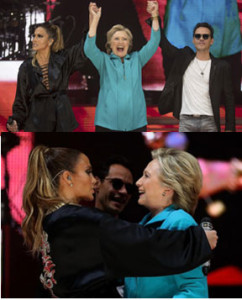 MIAMI, FL  — Part pop concert part political rally, a megastar known as Jennifer Lopez packed the Bayfront Park Amphitheater Saturday night, making it the place to dance, sing and urge fans to get out and vote.

“I’m getting excited because we’ve got to have our first woman president!” yelled out Jennifer Lopez

Lopez was joined by her ex-husband Mark Anthony to literally sing Hillary Clinton’s praises to this predominantly Latino crowd both in song and in message.

The democratic presidential nominee was front and center on stage, working the battleground state of Florida, talking to this audience she wants to win over which is Hispanic voters.

“I think J-Lo is the cherry on top but Hillary Clinton is going to transform this nation and going to build  on what Barack Obama has done and I’m so excited to be a part of this movement that is going to elect the first female president of The U.S.,” said Gregory Gayle, a Clinton supporter.

Other notables in the democratic party showed up to support their candidate as well.

“I think it good to have new people like Jennifer Lopez  come and generate some excitement for people who might not be paying attention to politics,” said Congressman Patrick Murphy.

This star studded night all designed with the hopes that the Latin beat will make the crowd move in more ways than one, not only on the dance floor but in the voting booth as well.