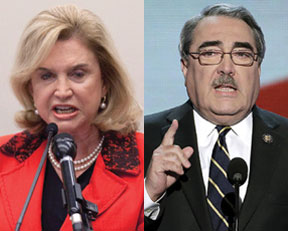 Report observes broadening and persistent inequities in employment, income and wealth Among Blacks

WASHINGTON, D.C. – African Americans face an unemployment rate double that of white workers and are nearly three times as likely as white Americans to live in poverty, according to a new report by the U.S. Congress Joint Economic Committee (JEC) released recently by Congress-woman Carolyn B. Maloney (D-N.Y.), Ranking Democrat on the JEC, and Congressman G. K. Butterfield (D-N.C.), Chairman of the Congressional Black Caucus (CBC).

The report reveals that African Americans continue to confront a range of economic challenges, including disproportionately high rates of poverty, unemployment and longterm unemployment as well as significantly lower incomes and slower wealth accumulation than white households.  When examining various measures to determine economic well-being, the report finds Black Americans lag far behind the white population.

Among the report’s key findings:

“The numbers are stark, they are troubling and they are unacceptable,” said Congresswoman Maloney, Ranking Democrat on the Joint Economic Committee.  “What’s especially concerning is that the already-large racial gap in household wealth has grown even wider since the recession. This report is a powerful, sobering reminder that policymakers must do more to open doors of opportunity for African Americans.”

“Today’s report detailing the disparities that African Americans face comes as no surprise to those who experience the reality of such inequities in their daily lives,” said Congressman Butterfield.  “Much of the country has experienced an economic recovery over the last six years, but there is still much work that remains and nowhere is this more evident than in the African American community.  This report sheds light not only on the state of affairs for Blacks in America but on the country as a whole and the divide that has persisted for generations due in large part to our country’s history of racial divide, oppression and lack of access. The JEC report brings about a renewed focus on our work in Congress and what lawmakers must do in order to level the playing field so all Americans can have a fair shot and an opportunity to achieve the American dream.”

“Every member of Congress should read this shocking report, which shines a spotlight on the overwhelming economic challenges facing African-Americans,” said Congressman John K. Delaney (D-Md.) “The report makes it clear that many of our fellow citizens are struggling, including in Maryland where the African-American unemployment rate is nearly twice that of whites and the median household income is barely half. I hope that this report is a call to action that fundamentally changes our future policies, so that all Americans have equal access to economic prosperity.”

“This report documents persistent economic barriers African Americans face, even as the rest of the country recovers from the worst financial downturn since the Great Depression,” said Congressman Don Beyer (D-Va.) “If we are to meet the challenge of the promise of equality in America we need to address these inequities in employment, income, wealth, housing and education through policies designed for inclusive prosperity.”

The collapse in home values during the recession hit Black households especially hard, since a high proportion of African American wealth is comprised of homeowner equity.  While housing has rebounded in recent years, the recovery has not kept pace with the returns in the stock market, leading to a slower recovery in Black household wealth than for whites.

Nearly 90 percent of Black voters plan to cast ballots for Hillary Clinton and two percent plan to vote for Donald Trump, according to the poll. […]