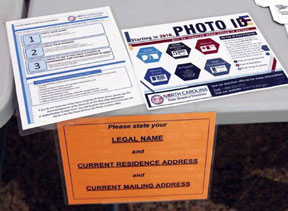 WASHINGTON, D.C. – In a landmark ruling issued recently, the Fourth Circuit Court of Appeals overturned North Carolina H.B. 589, a monster voter suppression law with sweeping implications for voters. Presented with clear evidence that provisions of the measure would disproportionately burden voters of color, the three-judge panel struck down the law, finding that it violated the Voting Rights Act, the United States Constitution and that it was enacted with discriminatory intent. The court stated that it “cannot ignore the record of evidence that, because of race, the legislature enacted one of the largest restrictions of the franchise in modern North Carolina History.” Advancement Project, a national multi-racial civil rights organization among the groups that brought suit challenging the law, released the following statement:

“This is a victory for the people of North Carolina, who spoke up by the thousands against a racist, undemocratic, suppressive law,” said Judith Browne Dianis, executive director of Advancement Project’s national office. “We congratulate every organizer, resident and impacted persons on this win, as well as the courageous plaintiffs and witnesses who brought the true impact of this discriminatory law to light. In saying that the law ‘targets African-Americans with almost surgical precision’ in an effort to depress Black turnout, to ‘impose cures for problems that did not exist,’ the court stated what is known in the Black community. Voter ID is about thinly veiled, race-based restrictions to the polls, enacted to thwart the growing political power of the rising American electorate. Advancement Project will continue to stand with partners by not only pushing back aggressively against attacks on voting rights, but by organizing along-side partners for an affirmative right to vote enshrined in our Constitution.              Even as we celebrate this victory, we understand that there is much more to do.”

“North Carolina voters have been held hostage since the enactment of this discriminatory, ‘monster’ voter suppression law almost three years ago to the day, said Advancement Project Senior Attorney Donita Judge. “The decision by the Appeals Court vindicates our claim that HB 589 was passed with racially discriminatory intent. Today, North Carolina voters can breathe a sigh of relief when they go to the polls in November since the barriers to the ballot imposed by the North Carolina legislature will not frustrate their most fundamental right—the right to vote. This is a good day for democracy.”

“We are gratified that the Fourth Circuit Court of Appeals recognized that North Carolina’s monster voter suppression law violates the Voting Rights Act and the United States Constitution,” said Denise Lieberman, Senior Attorney with Advancement Project. “Indeed, the court recognized the clear evidence that the law produced discriminatory effects and was enacted with discriminatory intent. This ruling validates that lawmakers cannot run roughshod over voters’ rights for their own political gain. It affirms that discriminatory voting measures cannot stand. And in places like Missouri, this ruling strengthens the case that local communities are making against efforts to weaken the state’s constitutional right to vote in order to jam through a restrictive voter ID initiative. In Missouri, as has been shown in North Carolina, such measures equate to a full-force attack on the voters’ rights – especially voters of color, who face disproportionate barriers to acquiring photo ID. Just like the court recognized this injustice in North Carolina, we believe that voters will recognize this inequality in Missouri come November.