On The Scene With Crystal Chanel and Audrey Aaron

Just a few short weeks ago, On the Scene along with most of the nation’s major media outlets, reported the startling anti-gay, racially charged attack on Empire actor Jussie Smollett. Early reports alleged that Smollett was attacked in 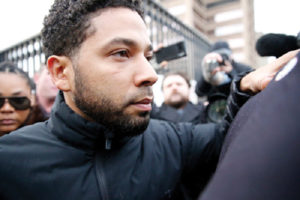 Chicago by two white men wearing MAGA hats, yelling racist and anti-gay slurs who put a noose around his neck while pouring bleach on him. However, more recent reports from the Chicago Police Department now accuse Smollett of staging the entire attack. Eddie Johnson, Chicago Police Department Superintendent, addressed the media on Thursday, Feb. 21, 2019 in an official press conference, not only as a representative of the department, but also as a Black man and a Chicago native. “Jussie Smollett took advantage of the pain and anger of racism to promote his career. I’m left hanging my head and asking ‘Why?’ Why would anyone, especially an African American man, use the symbolism of a noose to make false accusations?”

Johnson went on to point out that Chicago hosts one of the country’s largest Pride Parades, proclaiming that, as a department, they do not tolerate hate of any kind in the city. After hearing the reports over the past week, my mind went in several directions. I thought about the celebrities and social influencers who used their various platforms to support and stand with Jussie, including our CEO, Crystal Chanel. Everyone from Steve Harvey to Bishop T.D. Jakes spoke out on Jussie’s behalf, offering their prayers as well as solidarity towards the issues of race and gender hatred.

I thought about the heartfelt statement issued by the Smollett family after the initial reporting. Jussie comes from a large family, where all his siblings having some experience in the arts and entertainment industry. His sister and arguably the most notable of the Smollett crew, Jurnee Smollett Bell, has made only one Instagram post since the family’s statement was released – a quote from human rights activist Malcolm X: “This is the media, an irresponsible media. It will make the criminal look like he’s the victim and make the victim look like he’s the criminal. If you aren’t careful, the media will have you hating the people who are being oppressed and loving the people who are doing the oppressing.”

And I thought about the barrage of social media backlash. Embarrassing memes are flooding timelines regarding Smollett’s alleged fabrication of being attacked. He is clearly the laughing stock of the community, and even Cardi B took to social media saying that the actor has ruined Black History Month. Tenured actor and Empire’s leading man, Terrance Howard, finally broke his silence by coming to the defense of his co-star. Howard shared a post on social media with the caption “We love the hell outta you.” On the other hand, the producers of the Fox drama “Empire” announced Friday that Jussie Smollett’s character would not appear in the final two episodes of the show’s fifth season.

Still, after weeding through the news reports, the underlying question on everyone’s mind is simple: Why would someone do this? Was Jussie trying to be some sort of martyr for racism and homosexuality? Is he mentally disturbed? Is he simply a pathological liar? Equally, there is no shortage of speculation on the matter. Everyone has an opinion as to why Jussie Smollett faked an assault and later dubbed himself “the gay Tupac.” The truth is if the accusations of a staged attack are true, we may never understand the motive behind the actions. It’s most likely that the “why” behind Smollett’s actions is more complicated than any one person’s opinion.

The larger issue at hand now is toward actual victims. Jussie Smollett is one man, but with expansive influence, and this case will undoubtedly have a ripple effect. Superintendent Johnson goes on to say that “Bogus police reports cause real harm. They do harm to every legitimate victim who needs support by police and investigators, as well as the citizens of the city.” Considering these recent accusations, people will be more hesitant to believe real victims, and as a society, we can’t afford that. For every woman who falsely cries rape, and every Black person who unduly cries racism, there are countless victims who fear coming forward with their truth. My concern is for them. There are real hate crimes happening. Sexual harassment and abuse are alive and well. Racism is real. Anti-gay agendas are real. It’s happening every day, across the nation, and those victims can’t afford to live in the consequences of a high-profile untruth.

2019 IS ALL ABOUT SETTING AND ACCOMPLISHING GOALS

If nothing else, we have learned in 2018, good or bad, what we think about is what we bring about. And with that knowledge, we move from 2018 into 2019 believing we can actually do and be all things. Unfortunately, when tragedy strikes, we lose focus, or we tend to forget that endless possibilities are in fact our portion. Accordingly, here are a few tips to help you set and accomplish goals throughout 2019: […]

WHILE WE #MUTERKELLY, WE NEED TO UNMUTE OURSELVES

From social media to CNN, from water cooler talk to our radio airwaves, the subject is unavoidable, and rightfully so. On the slim chance you haven’t heard, “Surviving R. Kelly” is a six-part Lifetime Television Network documentary detailing sexual abuse allegations against singer/songwriter, Robert Kelly aka R. Kelly […]