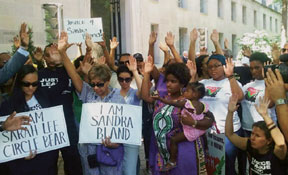 Protesters outside the Federal Dept. of Justice demand justice for Sandra Bland, who died in police custody after a questionable police stop in Texas. (Barrington J. Salmon/The Final Call)

By Barrington M. Salmon, Special to the NNPA from The Final Call

WASHINGTON, D.C. (FinalCall.com) – After vigilante George Zimmerman gunned down 17-year-old Trayvon Martin in 2012, Dr. Avis Jones-DeWeever said she has held her sons a little closer and worried about them whenever they left the safety of their home.

She has been a vocal and persistent critic of police brutality, racial profiling and the indiscriminate murders of Black men and teenagers in recent years, but said her concern and frustration has spiked with the recent deaths of Black women at the hands of law enforcement.

“We have to recognize and lift up the Black women who are dying. It’s a travesty,” the activist told the assembled group at the steps of the U.S. Department of Justice in downtown D.C. “Sandra shouldn’t have been stopped. She shouldn’t have been arrested. This is not the beginning of this problem. Seven-year-old Aiyana (Jones) was shot in the head while sleeping on a couch.”

Dr. Jones-DeWeever, who represented the National Coalition on Black Civic Participation and the Black Women’s Roundtable, was with other protest participants Aug. 3 demanding that Attorney General Loretta Lynch and the Department of Justice intervene more forcefully into cases involving Black and Brown people who are dying in police-involved incidents at an alarming rate.

Bland’s case came to light after a Texas state trooper stopped her on July 10 for an inconsequential traffic offense and she ended up dead in a Waller County jail cell three days later. The prosecutor claims Bland hung herself with a plastic garbage bag, a determination that has triggered anger, more questions and deepening skepticism.

State Trooper Brian Encina pulled over the 28-year-old Illinois native in Prairie View, Tex., for not putting on her turn signal while changing lanes. His dashcam video shows him goading her, asking if she was irritated. She told him she was, asked that he give her the ticket he wrote, and unexplainably, he asked her to put out her cigarette. She refused and Trooper Encina threatened to tase Bland, pulled her forcefully out of her car and threw her to the ground after she refused to obey his “lawful order.”

The randomness in the stop, the overly aggressive way Trooper Encina treated Ms. Bland and her subsequent death under suspicious circumstances has animated Blacks and other communities of color. The rally, organized by the Empowerment Movement, is just the latest one demanding answers surrounding Bland’s death and insisting that law enforcement and jail officials in Waller County be punished for their actions. Trooper Encina is on administrative leave for violating the troopers’ protocol, procedures and code of courtesy and the Federal Bureau of Investigation is conducting its own investigation.

New York-based activist Carmen Perez said those who’ve risen up in opposition to the steady drumbeat of police-involved deaths of Black and Brown unarmed civilians must find new ways to fight.

“We’re in a crisis, America is in crisis. Women are not elevated. They’re left to die in the system,” said Perez, a member of the Justice League New York City and executive director of A Gathering for Justice. “If we don’t continue to support our sisters, we’ll see more Sandra Blands. I love our brothers but we don’t raise the names of our sisters. We need full investigations and hold the system accountable. Police brutality is not allowable on the streets or in jails. We want the attorney general to institute accountability.”

“My heart is heavy because every single day on social media I see someone, sisters in the movement dead. I can’t take it anymore. We need some justice. We need justice. We need the Department of Justice to be as angry as we are. Where is Loretta Lynch?”

Interspersed with remarks by activists and organizers, the crowd chanted their support of Bland and the other victims, and lifted Bland’s name to the heavens. Some held up placards calling for justice for Bland, while others hoisted posters with the names of women who’ve died in police custody including Ralkina Jones, Joyce Curnell, Sarah Lee Circle Bear and Kindra Chapman. Among those who spoke were Nation of Islam Student Minister Carlos Muhammad, reality television star Kandy Smith-Harris, Baltimore activist Malacka Reed-El and New York rapper Mysonne Linen.

The Rev. Willie Wilson, pastor of Union Temple Church in Southeast D.C. and one of the organizers for the Justice Or Else! gathering planned for Oct. 10 and convened by the Honorable Minister Louis Farrakhan, provided historical context for what Black people face in 2015.

“We need to understand that history isn’t automatically progressive. It’s regressive. What we’re looking at is regression,” he said.

During Reconstruction, then as now, Rev. Wilson said, Blacks made civil rights and other gains then experienced a backlash from racist whites threatened by Black progress. Blacks were lynched and murdered, states’ rights ruled and the federal government adopted a hands-off policy.

The Rev. Jamal Bryant, pastor of Empowerment Temple AME Church in Baltimore, threw down the gauntlet. He said racists have taken off their hoods and put on blue uniforms and in response, those opposed to racist violence by law enforcement will invoke the names of Black people killed in Cleveland, Baltimore, Staten Island, N.Y., Texas and elsewhere.

“We’re under full attack and assault,” he said. “We’re on Code Red. Every person who has a Black mother should be on this line. The unsung hero of the Black movement has been the Black woman. We celebrate the nameless, faceless sisters who’ve given their lives. If any of us is in trouble, we all are in trouble. We will not rest until justice flows like a mighty river.”

Mr. Bryant, another organizer of Justice Or Else! which also marks the 20th anniversary of the 1995 Million Man March with a demand for justice, put politicians on notice.

“Elected officials need to step to the plate. To the 17 Republicans running if you cannot speak the words ‘Black Lives Matter,’ then we won’t care about you. We will take nothing less. We need to hear policies, laws and programs for you. Here are your options: Justice Or Else!”

Tamika Mallory, a member of the Justice League NYC, declared that she is Sandra Bland, a sentiment shared by women at the rally.

“The media hasn’t covered these cases properly,” she said. “I’m tired of coming back to the same place, with the same discussion asking for accountability. We saw the video of the blatant disrespect shown Sandra Bland. Imagine what’s happening without videos.”

First Black woman to graduate from MIT with a Ph.D. in Nuclear Engineering

Black girl magic was in full effect earlier this month when Mareena Robinson Snowden became the first Black woman to earn a Ph.D. from MIT in Nuclear Engineering. […]

The CBC Chair likely was exasperated with several Republican members of Congress, who spent part of the day removing a teen’s art from a long hallway with 200 art pieces in the U.S. Capitol […]