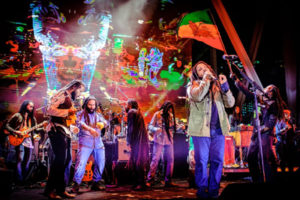 “Education Before Recreation.” The theme of Kaya Fest 2019; Kaya Fest overall.  “Kaya Fest is the creation of Stephen Marley, an eight-time Grammy Award winner, singer, songwriter, musician producer and son of the legend Bob Marley.  It was named by the New Times as one of “Miami’s Ten Best Musical Moments of 2017!” Presented by Fruit of Life Productions and The Alacran Group it is scheduled to return Saturday, April 20th, 2019 / 1 p.m., at Bayfront Park Amphitheatre, 301 Biscayne Blvd. in downtown Miami after a triumphant 2018 Sell-Out in California!”

One of the rare times the Marley brothers get together on stage you do not want to miss this star-studded performance.   The Marley Brothers; Ziggy, Stephen, Damian, Ky-Mani and Julian along with Busta Rhymes, Davido, Sean Paul, Kes the Band, Chi Ching Ching, Protoje, Walshy Fire (of Major Lazer) Third World, Koffee and a special guest appearance by Farruko, and Pitbull.  Will give on-lookers a show of a lifetime.  This is a show that marijuana/kaya/cannabis/hemp, Mary Jane, users don’t want to miss.  While the education is delivered throughout the show, users of the substance freely enjoy the benefits of smoking without repercussions.  However, one of the main reasons people attend is to see the show.  The highly anticipated show on April 20th will no doubt have audience members on their feet dancing to the sweet sounds of reggae music thought the day and enjoying great food.  There is still time to get your tickets don’t be the only one in south Florida not attending please go to www.kayafestivals.com to get your tickets.

Let’s Get Together And Feel Alright! Kaya Fest 2019