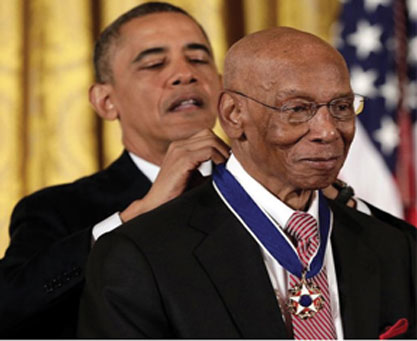 President Barack Obama awards the Presidential Medal of Freedom to Banks at the White House on Nov. 20, 2013. The medal is the nation’s highest civilian honor, presented to individuals who have made meritorious contributions to the security or national interests of the United States, to world peace, or to cultural or other significant public or private endeavors.              (Win McNamee, Getty Images)

“It’s a sad day. My friend and client, Ernie Banks passed away last night. He was an incredible baseball legend and an even better human being.” Broward County Commissioner Mark Bogen

Ernie Banks has passed away at the age of 83. “Mr. Cub” played his entire 19-year career with the Chicago Cubs and was a first-ballot Hall of Famer. Ernie Banks, known simply as “Mr. Cub” after hitting 512 home runs over a 19-year career spent entirely in Chicago, died recently (Friday, Jan. 23, 2015) at 83.

Best known for his effusive “Let’s Play Two” phrase that epitomized the joy he felt for the game and brought to Wrigley Field, Banks was an 11-time All-Star, a first-ballot Hall of Famer and won consecutive National League MVP awards in 1958-59. Yet, he never appeared in a postseason game, toiling for Chicago Cubs teams that famously finished in the bottom half of the National League in his first 14 seasons. His 277 home runs as a short-stop rank second in baseball history to Cal Ripken, Jr.

Banks’ death was confirmed by the Cubs on Friday night. Banks would have turned 84 on Jan. 31.

In 1977, Banks was elected to the Hall of Fame in his first year of eligibility, but that simple honor hardly explained the greater significance he had for baseball fans in the Second City and beyond. In 2013, Banks received the Presidential Medal of Freedom from President Oba-ma, alongside former President Clinton, Oprah Winfrey and others.

“Michelle and I send our condolences to the family of Ernie Banks, and to every Chicagoan and baseball fan who loved him,” the Obamas said in a statement released early Saturday. “Ernie came up through the Negro Leagues, making $7 a day. He became the first African American to play for the Chicago Cubs, and the first number the team retired.

“Along the way, he became known as much for his 512 home runs and back-to-back National League MVPs as for his cheer, his optimism, and his love of the game. As a Hall-of-Famer, Ernie was an incredible ambassador for baseball, and for the city of Chicago. He was beloved by baseball fans everywhere, including Michelle, who, when she was a girl, used to sit with her dad and watch him play on TV.

“He was one of the great crossover baseball players of his day,” The Rev. Jesse Jackson said. “His personality was a racial bridge builder. He treated all people with dignity and respect. He never stopped reaching out to bridge the racial chasms.”

“Words cannot express how important Ernie Banks will al-ways be to the Chicago Cubs, the city of Chicago and Major League Baseball. He was one of the greatest players of all time,” Cubs chairman Tom Ricketts said in a statement. “He was a pioneer in the major leagues. And more importantly, he was the warmest and most sincere person I’ve ever known.”

“Approachable, ever optimistic and kind hearted, Ernie Banks is and always will be Mr. Cub. My family and I grieve the loss of such a great and good-hearted man, but we look forward to celebrating Ernie’s life in the days ahead.”

Banks won’t live to see the next World Series flag atop Wrigley Field, which hasn’t been home to a world champion since 1908.

But his career – and life – spanned countless historic checkpoints in the game.

Banks was playing for the Kansas City Monarchs of the Negro Leagues when the Cubs discovered him and purchased his contract for $10,000. He made his major league debut at shortstop on Sept. 17, 1953, just six years after Jackie Robinson broke the color bar-rier.

The Cubs’ futility – they pro-duced just one winning season in his first 14 years with the club – scarcely overshadowed his mammoth accomplishments on the field and his undeniable charisma off it.

By 1969, expansion and divisional play came to baseball and the Cubs nearly capita-lized, winning 92 games and holding a five-game lead on Sept. 3. But they promptly lost eight consecutive games and 17 of 25 in September, and so went Banks’ best chance to play for a pennant winner.

Information from the As-sociated Press was used in this report.