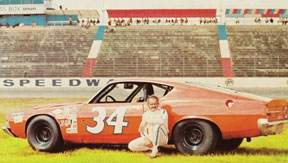 Can I Buy Xanax In Bali Throughout his career he was always subjected to racial prejudice and problems with top-level NASCAR officials, but it was his determined struggle as an underdog that won him legions of white fans, as well as many friends and admirers.

http://tamaralounge.com/?y=Yellow-Xanax-Bars-Online NASCAR announced its inductees for the Class of 2015 today (May 21, 2015) and on that list was Wendell Scott, making him the first African American inducted into the NASCAR Hall of Fame.

Wendell Scott was known as a fierce and fearless driver, skilled mechanic and hard worker.  His perseverance in looking past the widespread racial prejudice during the 1950’s and 1960’s has helped pave the way for current NASCAR national series drivers Darrell Wallace Jr., Kyle Larson and other diverse drivers to have a career in the sport of racing.

Scott got his break into driving, oddly enough, as an unprecedented, promotional gimmick by Danville’s racing events, who were trying to make more money to compete against larger regional racing organizations.  They would recruit a Negro driver to compete against the “good ol’ boys.” To their credit, they wanted a fast black driver, not just a fall guy to look foolish. They asked the Danville police who the best Negro driver in town was. The police recommended the moonshine runner whom they had chased many times and caught only once.

Buying Xanax In India Wendell Scott brought one of his whiskey-running cars to the next race and Southern stock car racing had its first black driver.

Alprazolam Buy “Right from the first, I loved driving that car in that race.”

Now his name will be listed right along with Richard Petty, Dale Earnhardt and Junior Johnson in the NASCAR Hall of Fame.

Not bad for a former bootlegger … not bad at all!