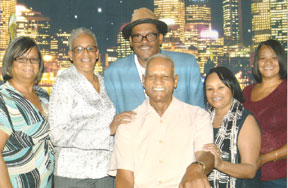 Historically, Black journalists have been at the forefront of the struggle for equal rights. Recording the accurate account alongside the freedom fighters in America’s history has been their cross to bear. Without Black journalists, the Black Press and the Black church, who could African Americans rely on to tell their story with truth, passion and integrity? From the Exodus in 1786, from white, St. George’s Methodist Episcopal Church in Philadelphia by Black parishioners to the very first Black owned newspaper, Freedom’s Journal founded by free born African Americans John Russwurm and Samuel Cornish on March 16, 1827 in New York City; we have been championed to “Pleading our own cause “and telling our own stories by preaching liberation from the pulpits of our own churches.

From the Free African Society founded by Jones and Allen in 1787 to aid in the emancipation of slaves to The Freedoms’ Journal to abolitionists Frederick Douglas ‘s The North Star, championing the cause to end slavery which reverberated all the way to  President Abraham Lincoln in the White House; as they say, the rest is history.

From the early years until today, The Black Press and the Black Church have played an integral part in making sure “Our own soldiers without swords will plead our own cause and tell our own Story.”

The year 2015 marks the 75th Anniversary of the National Newspaper Publishers Association (#ourvoice75), our nation’s oldest Black Press organization. February also marks the 44th Anniversary of the Westside Gazette Newspaper, Broward County’s oldest and largest Black owned and operated newspaper. Join as we pay tribute to The Black Journalists of the Black Press: Paving the Path Toward Freedom.

When I use the term I in this piece, I am referring to all of the families of the Westside Gazette, those who are here now and those who have crossed over to eternity. All of us who toil every day to do the best that we can with what God has allowed us to carry on in the foot steps and on the shoulders of those that came before us- to which we will always be most humble, grateful and exuberantly proud to accept that honor, and most importantly, the favor from God.

I never knew of but one thing that could give so much pleasure and pain at the same time while drawing you to it like a hungry baby to a full breast of mother’s milk. That is love and the joy of doing that which you love.

It is with this love that I/we passionately put our shoulders to the grinding stone every day to carry on the legacy of the Black Press.

For 44 years, the Westside Gazette has tried to hold fast to the precepts and fundamental strengths and tenets of the Black Press while standing in the gap “Pleading our own cause.”

That gap will forever increase as long as we allow advertising dollars from those businesses that take from our readers their hard earned dollars and spend those dollars to advertise with the “Other” newspapers.

That gap increases when our own try to destroy us. That gap continues to increase as long as the church and the Black Press fail to communicate on common ground.

But like David, we understand that it all belongs to God. We know that everything is divinely provided; it is incumbent on us then to practice proper stewardship by giving back in all areas of our lives.

We continue to do as the Credo for the Negro Press states: I Shall Be A Crusader… I Shall Be An Advocate… I Shall Be A Herald… I Shall Be A Mirror And A Record… I Shall Have Integrity… I Shall be a crusader and an advocate, a mirror and a record, a herald and a spotlight, and I Shall not falter.

So help me God.

“and having shod YOUR FEET WITH THE PREPARATION OF THE GOSPEL OF PEACE.”

Florida Unity’18 Campaign focused on connecting economic Justice, Voting Rights and the power of the Black women and millennial vote in the 2018 Mid-Term Election cycle […]