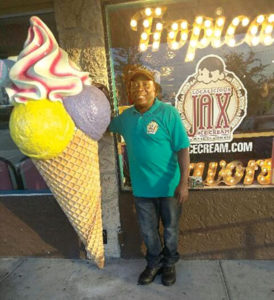 South Florida’s first Black-owned ice cream company is successfully and rapidly expanding, with plans to open stores beyond the state of Florida. Within three months, the family owned and operated ice cream parlor has grown beyond its cozy Lauderhill, Florida location, opening its signature colorfully decorated stores in West Park, Gainesville, and, very soon, in Fort Lauderdale on the 17th Street Causeway. A beloved community favorite, Localicious Jax Ice Cream’s sweet treats speak for themselves, receiving numerous accolades and the loyalty of a growing fan base representing all parts of Broward county. 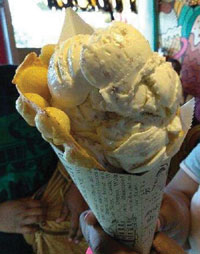 “I have no regrets.” stated owner, Cleveland Smith. With nearly 40 years of experience, Smith is a master ice cream artisan with much to be proud of. After falling into ice cream making by chance, he quickly learned the rare skill and worked as the sole ice-cream maker at the famous Jaxson’s Ice Cream Parlor and Restaurant in Dania Beach, Fla.

“I worked by myself in the back making everything, ice cream and sodas,” he said, “I worked behind the scenes for 30 years until I hired somebody.”

After 37 years with Jaxson’s, Smith felt it was time to branch off on his own, opening the first Localicious Jax Ice Cream Parlor in Lauderhill months later.

“I hope by next year this time we might have 10 or maybe more.” Smith said.

Localicious Jax is only one of few Black owned ice cream parlors in the United States, making the company’s success even more celebratory. The Smith family sells an excellent product and their expertise is apparent with each bite.

“You rarely find a Black person serving their own ice cream,” Smith explained. “It is a rare trade.”

“I’m not afraid of putting a business up anywhere,” Smith states, “We need to fill up our own communities [with businesses] and hire within the neighborhood.”

And that he does. Although a family owned and operated business, Localicious employs from the local communities they serve, giving some the opportunity to work their first jobs.

“Some of the employees, this is the first time they have work-ed, their first job,” Smith proudly stated, “I hire teen-agers, too. We all got to start somewhere.”

Although the business is currently focused on expansion, Smith hopes to get more involved in community initiatives as he has noticed the ice cream parlor making a positive social impact, quickly becoming a community staple and a local favorite.

Smith has plans to expand to an even greater market, al-ready searching for additional opportunities outside of Florida. While the business plans to open 50 retail stores in the near future, Localicious Jax Ice Cream can be ordered online and for wholesale. The Smith family also has plans to have ice cream available in grocery stores across the United States.

Smith aims to build an even more successful business in hopes of giving it to future generations. He is currently teaching his wife and daughter how to make his famous ice cream.

“It’s not really easy but he makes it look so easy because he has done it for so long. He knows it like the back of his hand.” Sonia Smith, Cleveland Smith’s wife, stated as she is in the throes of ice-cream making training.

In the meantime, Smith admits he is happily enjoying the success of his business and the day to day challenges and thrills of owning and operating his own ice cream parlor. Working around ice cream, it is hard not to be happy.

“It’s a happy business. I see this place bringing families together. Seeing families say, ‘Hey, let’s go have some fun and get ice cream’. I see it every day. Ice cream really brings people together.” Says Smith.

Getting ice cream with family is a favorite past time and the family friendly atmosphere ushers in that type of cheerful outing. Drawing over 200-250 people a day, local favorites vary, but the most popular remain rum raisin, butter pecan, praline, cotton candy, bubblegum, and birthday cake. There are even nondairy, low calorie selections available. De-spite the many options, each one is perfected by Smith and tastes just as good.

Tierra and her four-year-old daughter, Taylor, agree. Tierra learned about the ice cream through word of mouth.

“We were going to go somewhere else, but somebody told us about it and we decided to come here instead,” Tierra said, “I’m glad we came. The ice cream is really good and everyone here is very nice.” There’s much to celebrate as Taylor is headed to kindergarten this upcoming school year.

Cleveland Smith has much to be proud of as an impactful, favorite local business. With a great product, the sky’s the limit.