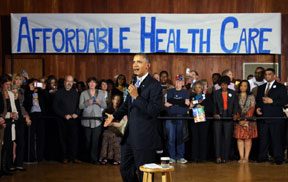 Just prior to the March 31 enrollment deadline, Carolyn Simmons, 56, of Boynton Beach signed up for a low cost health insurance plan under the Affordable Care Act (ACA).

Her elation at finally being able to seek medical care for several long neglected health problems including high blood pressure was soon dashed when she discovered that the first medical practice she was assigned to had been ‘slammed’ with so many new patients that it was no longer accepting new ones.

A second medical practice she was subsequently assigned to, informed her that she wouldn’t be able to get in for another seven weeks, that’s how inundated they were with new patients.

“I had no idea it was going to be like this,” said Simmons in frustration. “I thought I’d already have been in to see a doc-tor.

Similarly, Connie Williams, 37, a customer service representative for a West Palm Beach telecommunications company, thought she’d made a good decision by dropping her employee insurance plan, opting instead for a lower cost plan under the Affordable Care Act.

Assured that she’d be able to retain her female primary physician, who she’d had for several years, she was completely taken aback to learn that her doctor was not in the new healthcare network and she was being assigned to another practice.

“Had I known I wouldn’t be able to keep my primary doctor, I’d have never changed plans. I had been going to her for four years. I trusted her judgment, but now I’m supposed to start all over with a new doctor.”

All across the country, consumers are experiencing similar situations and are protesting loudly. The problem was not unexpected, however. Early on, industry analysts predicted this outcome. Central to the problem are “narrow networks.”

Essentially, narrow networks involve a trade-off. In exchange for keeping premiums lowered and adhering to the pre-existing condition provision, insurance carriers have limited the healthcare choices available to consumers. And the problem exists all across the board, not just with the lowest costing plans.

Consequently, there has been a growing stream of consumers losing their doctors after switching to lower-cost insurance plans which excluded their previous provider. Compounding this problem is the virtual glut of new ACA enrollees making doctor’s appointments.

·   At the same time many medical practices are being swamped with new patients, there is also the situation of doctors renegotiating with insurance providers each year. As a result, the physician a consumer is assigned to initially may cease being their physician if he or she negotiates a lower cost contract with another insurance carrier;

·   Also today many companies are switching their employee healthcare plans annually in an effort to drive down costs with the end result being that some employees’ doctors may not be included in the more affordable care plans offered through the insurance exchanges.

·   Similarly, employees leave jobs, companies close or down-size, and workers wind up with a healthcare plan that no longer includes their primary doctor;

·   In other instances, smaller companies, who are eligible to waive the penalties, opt out of their plans forcing their employees to enroll in the health-care exchanges.

Many of these problems, which can’t all be squarely placed at President Obama’s feet, are, nevertheless, adding to the massive log-jam in medical services which many patients are experiencing today.

According to a Humana representative, Humana has decided to relax some of its regulations such as normally requiring a primary physician to be listed on the healthcare ID card before a medical appointment can be made. Given the number of people who are discovering that providers have stopped taking on new patients or the wait time borders on two or more months, Humana is now encouraging people to go online to view a list of network providers, calling each one to see if they can make an appointment with them.

As a last resort, Humana is also allowing patients to go to urgent care facilities for the time being if they carry Humana. Typically, urgent care providers carrying Humana charge $35 as a patient’s co-pay amount, while a primary physician’s co-pay is $25, al-though the co-pay for going to an urgent care clinic outside of the provider’s network borders on the amount many plans re-quire for visiting a specialist.

To the Obama Administration’s credit, eight million consumers signed up for Obamacare by mid-April, far surpassing their seven million goal coupled with the fact the Administration met its goal by recruiting 28 percent of young people between the ages of 8 and 34.

The younger generation is largely viewed as the under-pinnings of the ACA counter-balancing the number of seniors in the program. Undercutting President Obama’s 2009 commitment to permitting patients to keep their own doctors, however, has been the sheer number of people losing their primary physicians when they changed healthcare plans, a fact that has left a bitter taste in the mouths of many Americans.

According to the report, Affordable Care Act of 2010: Creating Job Opportunities for Racially and Ethnically Diverse Populations, the health care sector could add 4.6 million jobs over the next decade – a 31 percent increase in the industry. […]

The Republicans are wrong again about the Affordable Care Act

The Republicans are wrong again about the Affordable Care Act
[…]

By JIM SAUNDERS THE NEWS SERVICE OF FLORIDA THE CAPITAL, TALLAHASSEE, January 30, 2013……Despite criticism from top Democrats that the state has been “dragging its feet,” House and Senate Republican leaders said Wednesday they would […]