White was named to the College Football Hall of Fame

Former Michigan State football running back Lorenzo White was named to the College Football Hall of Fame recently, joining a host of Sp artans greats. (The induction ceremony was held in New York on Dec. 10.) White stood 5 feet 11 in East Lansing, but had a big impact on the Spartans, taking them to the 1988 Rose Bowl in his senior season. As coach George Perles told the South Florida Sun-Sentinel in 1985, “We call him ‘Big Foot.’ He can gear down, let people go by him, then motor again,” referencing his size 12EE shoes.

MSU 27, Indiana 3: White carried the ball a ridiculous 56 times (at 5.2 yards a carry) en route to 292 yards as the Spartans clinched their first Rose Bowl trip in more than 20 years.

Though it didn’t factor into the College Football Hall of Fame’s call, White had a productive career in the NFL. White spent eight years in the league — seven with the Oilers and one with the Browns — and made the Pro Bowl in 1992. That season, he rushed for 1,226 yards with the Oilers as Houston was eliminated from the playoffs by 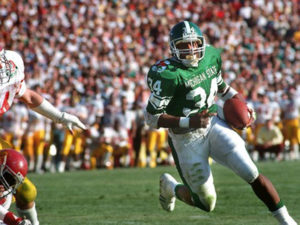 Buffalo in the biggest comeback in NFL playoff history.

Why President Barack Obama is one of the best ever

President Barack Obama will go down in history, as arguably one of the most successful presidents of the United States. […]