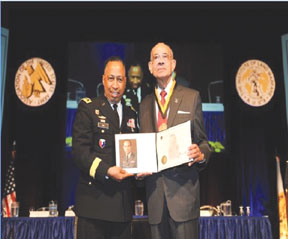 A leader, retired Lt. General Arthur J. Gregg has said, “You must always put the mission first, and him or herself last.” This is a fitting quote for a man who dedicated himself to service for others. Perhaps this is why the AUSA has bestowed on him a prestigious honor in his own name, ‘The Lt. Gen Arthur J. Gregg Sustainment Leadership Award’. This bestowal will be given yearly to soldiers and civilians who have made indelible contributions to logistics and administration in the U.S. Army. “Logistics” include all the supplies and services our men and women in the military need to do their jobs. “I’m so very honored,” he said in a phone call from his home in Virginia. “You must feel somewhat humbled when you are re-cognized for such an award, when you realize that there are many outstanding men and women who are to be considered.”

Lt. General Gregg is a shining example of the legacy of Colonel Charles Young, the first African-American soldier to reach the rank of Colonel in the U.S. Army in 1917. Where it not for the racism of the time, Col. Young would surely have been promoted to Brigadier General, but his drive and love of country despite social impediments have influenced many men and women who have come after him, including Lt. General Gregg.

Lt. General Gregg’s long career began in 1946 at the tail end of World War II, when the fighting had ended but some of our biggest work was ahead of us. He entered the armed forces as a Private when they were still segregated, at the tender age of 17. Asked why he felt such fidelity for a country that, for all intents and purposes, still saw him as 3/5ths of a per-son, he responded, “It was still my country. With all its imperfections, I still had hope that things would get better. And my service contributed to that positive environment—it did get better.” Lt Gen Gregg saw the military as a touchstone for change in the larger society as a whole, and he continues to do so.

In 1948, President Harry Truman desegregated the military, but Gregg and his fellow servicemen didn’t know that the law had passed until actual changes began to take shape during his tour of duty in Korea. “When men and women were needed to fight battles in Korea, you provided the trained soldiers and did not hold back because of race. It had a powerful impact on the integration of the rest of our country,” he says. “You had men and women leaving the military and going back to their respective communities, and they had personally experienced integration. When we got to know each other during our service, we often found that we liked each other. This changes people.”

The paving stones placed by the societal inheritance of Colonel Charles Young allowed Lt. General Gregg to quickly move up through the ranks due to his work ethic, intelligence, and focused dedication. He reached the designation of Lt. General in 1977, where he served under President Jimmy Carter in the Joint Chiefs of Staff, and later Ronald Reagan, shortly before his retirement from active duty in the late summer of 1981. His post-military career has been dedicated to serving on various boards of nonprofit and for profit organizations, many of which support African American causes. Gregg is a staunch supporter of our effort to post-humously elevate Colonel Young to Brigadier General and he has made many public appearances in support of our cause.