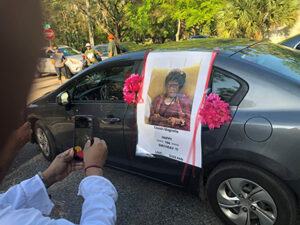 In a nation plagued by rising gas prices, war, global warming, coronavirus, racism and inhumanity, more than 50 people in Gainesville, Florida, celebrated the life of an outstanding educator and principal Magnolia Bradley Jackson. At 104, Principal Jackson is the oldest living alumnus of Bethune Cookman University founded for Black students by Mary McCleod Bethune. Born the youngest of 11 siblings March 14, 1918 in rural Rochelle, Florida, Magnolia’s intellectual acumen sailed her through Old Lincoln High to Bethune Cookman where she earned a degree in elementary education.

Sunny skies followed days of torrential rains and the beginning of daylight saving. Horns blared.  The E High School Alumni Band led cars with riders, some with lights flashing, to a poised Magnolia clad in a gold, black and maroon leisure suit, seated in a comfortable white lawn chair. 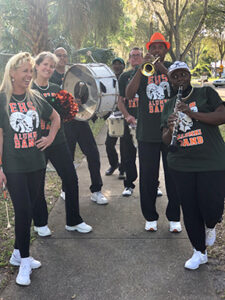 Magnolia excelled in a time in which Florida spent only 10 cents on Black children to every dollar spent on education of white children. Raggedy schools with pot belly stoves prevailed here and across the South for Blacks. Black teachers earned 60 percent the salary of White teachers until the mid 1950’s. Black children walked to school. Whites rode school buses. Black sharecroppers’ children, with few exceptions, did not attend school during harvest season. Books, if there were any, were outdated, worn  and used previously by Whites.   In 1954 the U.S. Supreme Court decreed “separate but equal” Black and White schools were not equal and violated constitutional rights of Blacks—a ruling resisted by many even today.

Magnolia taught and led during a time in which leading was dangerous. Educators  Harry  and Harreitte V.  Moore were bombed to death Christmas Day 1951 in Seminole County by Ku Klux Klan members. The Moores led the Florida NAACP to register more than 100,000 Blacks to register to vote. ending teacher pay differencies, racially segregated schools, and a racially discriminatory justice system were among the group’s goals. Harry died enroute to a Black hospital when a White hospital was closer. The couple was fired as teachers before being bombed.

An alert and appreciative Magnolia insisted on each person attending make a statement.  Dr. Susan Spence, one of Magnolia’s nieces and student, who recently retired as director of the doctoral program at Jackson State University, got cheers when it was announced that she had returned to her hometown to live after graduating more than 100 students with doctoral degrees.

These were the challenges Magnolia Bradley Jackson faced as she took the meager resources and instilled hope in thousands.

President of Morehouse College Dr. Benjamin Mays, quoted in the 1950 Journal of Negro Education, summed up the impact of segregation and the challenge of Black educators saying “Segregation with its inevitable consequences of inequality has warped the minds and spirits of thousands of Negro youths. They either grow to manhood accepting the system, in which case they aspire to limited, racial standards or they grow up with bitterness in their minds. It is the rare Negro child who comes through perfectly normal and poised under the segregated system.”

Grand nieces Everetta and Tonya Edwards produced this birthday celebration which often has more than 200 celebrants, except for the past two years due to coronavirus restrictions.