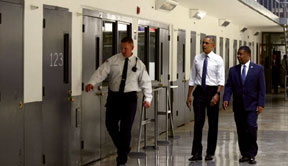 Man freed by Obama speaks out about the war on drugs

One of the prisoners who previously had his sentence commuted by President Obama was Jason Hernandez.

President Obama recently did something that no other sitting president in history has done; he visited a federal prison. President Obama toured the El Reno Federal Correctional Institution in Oklahoma where he visited Cell Block B, a section that houses prisoners who participate in a drug rehabilitation and prevention program.

He also spent just under an hour meeting with six non-violent drug offenders. The meeting came on the heels of President Obama commuting the sentences of a total of 46 low-level drug offenders. One of the prisoners who previously had his sentence commuted by President Obama was Jason Hernandez, who was sentenced to life without the possibility of parole in 1998 when he was just 15 years old.

In discussing his visit to the prison, President Obama pointed out that many of the young people in prison made mistakes similar to the ones he made, but the difference for President Obama was the fact that he had support structures that allowed him to have second chances and survive his mi-stakes.

Hernandez spoke with Democracy Now about his commutation and the War on Drugs. He says that his sentence being commuted was a dream come true, but he also wants the President and other lawmakers to work to do something about the inmates who were not as lucky as he was in receiving a commutation.

Hernandez was grateful for the opportunity to meet President Obama and thanks him for his commutation and the work he is doing to end mass incarceration. In discussing the fact that the President and lawmakers are finally taking on sentencing reform, Hernandez states, “It’s only took almost 30 years for Congress to realize that – and society, that the war on drugs, which you could actually call a war on minorities, is wrong; that we’ve been going about it the wrong way and locking people up for not only a couple of years, but 10 years, decades or the rest of their life, actually has an adverse effect on society.”

Hernandez reports that it is taking time to adjust to life on the outside.

His father has taught him to drive, and he is working on finding employment and looking forward to building a life for himself.

Creator of “The Wire” says war on drugs is a “holocaust in slow motion”; jurors should refuse to convict

discussed the drug war, which is described as a global crusade […]

War on drugs? Or war on the Black community?

Or war on the Black community? […]

Warring with the war on drugs

War on Drugs is a racially biased and strategy […]