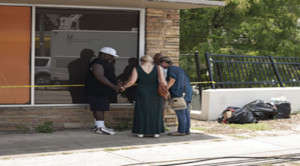 By Rhetta Peoples, Special From the Florida Sun

The worst mass shooting in the history of the United States just happened in Orlando.

Early Sunday morning and all at once and over the span of minutes, 50 people were gunned down and another 53 people were injured, at Pulse nightclub, a nightclub that is popular in the Central Florida LGBT community, on Orange Avenue in Downtown Orlando.

The gunman, identified as 29-year-old, Omar Saddiqui Mateen, was killed by police on the scene.

Orlando Mayor Buddy Dyer issued a statement today. “We are dealing with something we never imagined. Because of the scale, I have called Governor Scott to request a state of emergency and we are issuing a state of emergency in the City. This allows us to bring additional resources to support our efforts.

“Our focus in the coming hours will be identifying the victims and notifying the families. We are setting up a hotline for concerned family members – (407) 246-4357. The identification process may take some time. We ask for your patience as we want to be accurate. I continue to be proud of how our community has responded. #PrayforOrlando”

Governor Rick Scott, visibly shaken by the tragedy, said he has children and grand-children and cannot imagine what the families are going through and urged people to pray for the families of the victims and the community.

Scott said, “We are blessed to have the law enforcement we have, the Orange County Police Department, the Sheriff Department, FDLE, all the federal agencies, everybody has coordinated their activities very well.”

State Attorney Jeff Ashton said, “This is a terrible, terrible evil act. As a father of seven, I called and checked on some of my kids this morning to make sure they were ok. We’re doing everything we can, law enforcement is working well together, our victim advocates are helping out to see if we can work with families and I just encourage everyone, as I did my staff, to just please donate blood, because we are going to need a lot of it.”

Orlando Mayor Buddy Dyer swiftly prepared by having resources available for family members of the victims. Dyer, requested assistance from Governor Rick Scott for Central Floridians and both are working together, along with State Attorney Jeff Ashton, to help the families and victims in this tragic mass murder.

Mateen’s, a 30-year old American born citizen, motives are still unclear. Mateen’s father told NBC News, “This has nothing to do with religion.” He said his son became angry after seeing two men kissing a few months ago in Miami. He speculates this could have triggered his decision to kill. Governor Scott added, “For anybody that thinks that they should do this, I can tell you the State of Florida, the law enforcement, will be swift in their justice.”

People are urged to donate O+, O- and AB blood types at One Blood center on Michigan Avenue in Orlando. Visit www.oneblood.org and find a location near you or find the Big Red Bus to donate.

This massacre comes on the heels of the recent shooting Friday night at The Plaza Live in downtown Orlando that ended in the death of The Voice and YouTube singer Christina Grimmie. A gunman, Kevin James Loibl, from St. Peters-burg, Fla., walked into The Plaza Live and shot her in the head three times as she signed autographs. Loibl was tackled by Grimmie’s brother and then shot himself during the struggle. Loibl was carrying two extra magazines of ammunition and a hunting knife. Grimmie later died at the hospital.

A hot button in the Florida Legislature has been the Pastor Protection Act but some say it’s a hypocritical move by countless pastors.

The Pastor Protection Act, which was signed into law this past legislative session, protects clergy from lawsuits if they refuse to perform wedding that violates religious beliefs, such as for same-sex couples. (House Bill 43 and Senate Bill 110).

Months ago, specific pastors in the Central Florida community sounded off about wanting full protection against having to marry a same sex couple.

On social media, one pastor and members of his congregation even attacked elected officials for voting against the Pastor Protection Act.

But even prior to this bill, pastors were and are already protected under the law to be able to marry couples they feel are prepared for marriage regardless of sexual orientation so some say there’s no reason why the hotly disputed Pastor Protection Act, sponsored by Representative Scott Plakon (R-Longwood), should be a contested issue, even though it was signed into law at the end of session.

But, what significantly links the fight for the pastors to not be able to marry same-sex couples has become more ironic over the past 24-hours.

One pastor who was vocal about not marrying same-sex couples was scheduled to hold a vigil for the victims of Sunday’s massacre. Another pastor, who opposed marrying members of the LGBT community, rushed toward the cameras to stand in solidarity with elected and appointed officials as they spoke during a nationally televised press conference.

Pastors speaking out against marrying same-sex couples and then advertising and holding a vigil for national attention is the more unlikely couple. Some say those pastors have yet to do one thing in the LGBT community except protest the legal union and legal benefits for citizens while judging their lifestyle and most of all, judging who they love with all hopes of using legislative power to deny them the rights for which they are fighting.

Sound off on whether or not these pastors are saying one thing but truly believing another? Or, are they using this tragedy to gain national attention during one of the most trying times in American history?

Governor Rick Scott attended a prayer vigil at Iglesias El Calvario in West Orlando. His words were unifying. Scott said, “As Christians, we know God is with us and it is our faith in God that will persevere.”